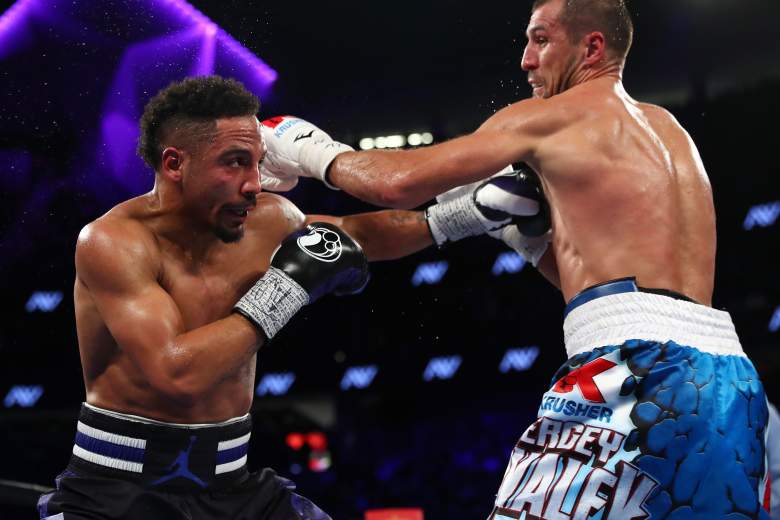 After a slow start, Ward (L) managed to come back and hand Kovalev his first pro defeat (Getty)

Having never lost a fight as a professional, Andre Ward continued that run after falling behind early to WBA, WBO and IBF light heavyweight world champion. Ward came back down the stretch, doing enough (in the judges’ view) to win the fight by unanimous decision with judges Burt Clements, Glenn Trowbridge and John McKale all scoring the fight 114-113 in his favor. With the win Ward is now 31-0-0 with 15 wins by knockout, while Kovalev suffered his first professional defeat and fell to 30-1-1 with 26 wins by knockout.

Kovalev controlled the action early on, using his jab to keep Ward at a distance. And late in the second round that work paid off, as Kovalev caught Ward with a right hand that sent him to the canvas. Ward would get up in time for the completion of the standing eight count, but wouldn’t be until about halfway through the third round when he would truly get back into the fight. Ward did land some quality shots in the fourth round, but Kovalev was still able to maintain control and keep Ward from setting up shop on the inside. Ward was more consistent with his punches in the fifth round, especially with his jab, and he was able to get a little more done as a result.

Ward was able to close the gap some in the seventh and eighth rounds, working the body on a more consistent basis and taking away some of the power Kovalev displayed early. Kovalev’s strategy of clinching when Ward managed to work his way inside was effective early, but Ward’s work to the body neutralized that some early in the second half of the fight. Ward continued that work through the final three rounds of the bout, pulling off the comeback and becoming the new WBA, WBO and IBF light heavyweight world champion.

As close as the fight was, hopefully there will be a rematch down the line. Below are the results from the fights on the undercard, which includes two-time Olympic gold medalist Claressa Shields’ professional debut.

Fredrickson moved to 15-0-0 in his career with a win by unanimous decision over Duluc. Two of the three judges scored the fight 78-74 in favor of Fredrickson, with the third scoring the bout 77-75 in Fredrickson’s favor. With the defeat Duluc drops to 11-2-0 as a professional, and he’s lost two of his last five bouts.

In a six-round fight that lacked action, prompting some fans to boo both boxers after the final round, McCreary moved to 12-0-0 with a majority decision. Judge Glenn Feldman scored the fight even at 57-57, with McCreary winning on the other two cards 59-55 and 58-56. Prior to turning pro McCreary when 87-15 as an amateur. But he’ll need to be more active if he’s to land major fights in the future, regardless of the fact that he’s still undefeated in his pro career.

Claressa Shields was victorious in her professional debut, winning the four-round bout by unanimous decision. All three judges scored the fight 40-36 in favor of Shields, who was able to draw Crews into fighting her style of fight. The two traded punches in a bout that had far more activity than the McCreary/Jennings fight that preceded it. With Shield being a two-time Olympic gold medalist with a style that boxing fans will enjoy, it will be interesting to see how her professional career pans out.

Curtis Stevens moved to 29-5-0 with a unanimous decision victory over James de la Rosa, winning on the cards 98-90, 96-92 and 96-92. As a result Stevens retains his WBC Continental Americas title, and he’s won his last two bouts since returning to the ring after a nearly 18-month stretch between fights. Prior to this May, Stevens last fought in October 2014. De la Rosa has now lost three straight fights since he defeated Alfredo Angulo in September 2014.

Gvozdyk retained his NABF light heavyweight title by technical knockout, with Chilemba’s corner (led by Roy Jones Jr.) having the fight stopped at the end of round eight. Chilemba was said to have suffered a broken right hand, and the injury was too much to continue with. Gvozdyk has now won 12 straight fights to begin his professional career, with Chilemba losing his second straight bout. In his last fight, Chilemba lost to Sergey Kovalev by unanimous decision.

Hooker and Perez fought a tough ten-round fight, and in the end the three judges could not come to a consensus despite the fact that many believed the challenger (Perez) to be the better fighter. While Perez did win 97-93 on Adalaide Byrd’s scorecard, Hooker was ahead 97-93 on Robert Hoyle’s card. And with judge Glenn Feldman scoring the bout 95-95, the fight ended in a draw with Hooker retaining the WBO NABO light welterweight title. 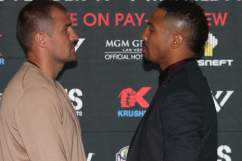 How to Order Kovalev vs. Ward PPV