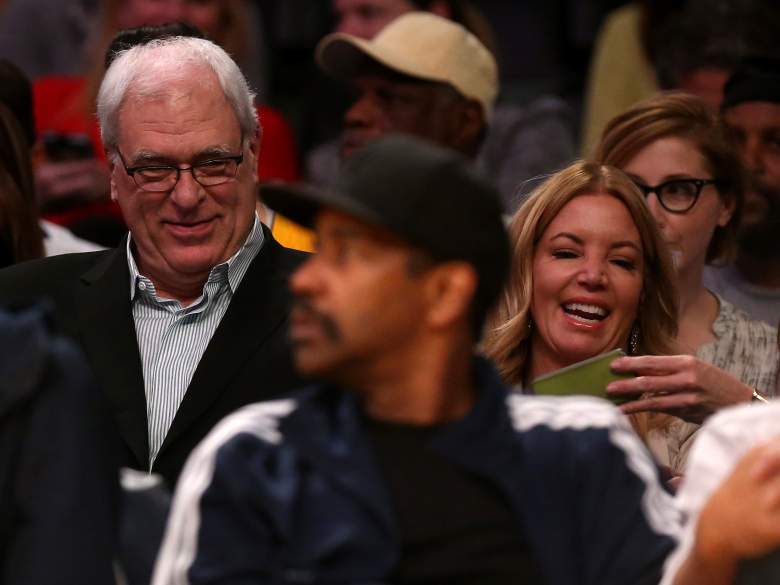 Phil Jackson and Jeanie Buss at a Knicks vs. Lakers game in 2015 (Getty)

Just over four years after announcing their engagement, New York Knicks president Phil Jackson and Los Angeles Lakers part owner/president Jeanie Buss (the daughter of late Lakers owner Dr. Jerry Buss) have ended their relationship. Jackson released a brief joint statement via his Twitter account late Tuesday night, citing the “geographical distance” as one of the reasons for the decision.

The love of my life is the Los Angeles Lakers. I love Phil & will always. It's not fair to him or Lakers to not have my undivided attention

Jackson and Buss began dating in 1999, the year in which Jackson began his tenure as Lakers head coach. Jackson, who won six titles with the Chicago Bulls prior to his joining the Lakers, won five championships with the franchise in 12 seasons. Jackson and Buss would date for another two years following the end of his time with the Lakers before Jackson proposed in late 2012.

Geography would come into play in their relationship in 2014, with Jackson accepting an offer to become president of the New York Knicks in the spring of that year. Jackson, who had never been an executive in the NBA prior to joining the Knicks front office, played ten seasons for the Knicks from 1967-78 and was a member of two NBA champion teams (1970, 1973). Jackson and Buss managed to keep their relationship despite the fact that they’re jobs keep them on separate coasts, something that wasn’t easy as Buss discussed in a 2015 interview with USA TODAY.

“We miss a lot of things together, and it’s a sacrifice,” Buss told USA TODAY’s Sam Amick in 2015. “But I think anybody who has been in a long-term relationship knows that if one person isn’t happy, then it’s hard for the relationship to be happy. And Phil needed something to do. Now I wish it would have been a little bit closer to home, but he found something that he’s enjoying and will hopefully be successful – but not at the cost of the Lakers.”

The relationship between Buss and Jackson factored into persistent speculation that Jackson would exercise an out clause in his contract at the end of the 2016-17 season and rejoin the Lakers franchise. This speculation was refuted on multiple occasions, and earlier this month it was reported that Jackson intended to stay with the Knicks until his contract expires in 2019. With the Knicks’ drafting of Kristaps Porzingis in 2015 and an active free agency period this past summer, a rebuilding project that got off to a slow start has gained some positive momentum.

Buss is currently presiding over a rebuilding project in Los Angeles, with the Lakers getting used to life without future Hall of Fame guard Kobe Bryant. The Lakers have young talent (most notably D’Angelo Russell, Julius Randle and Brandon Ingram) and a young head coach in Luke Walton, who played for Jackson with the Lakers and prior to his return was on Steve Kerr’s Golden State Warriors coaching staff.