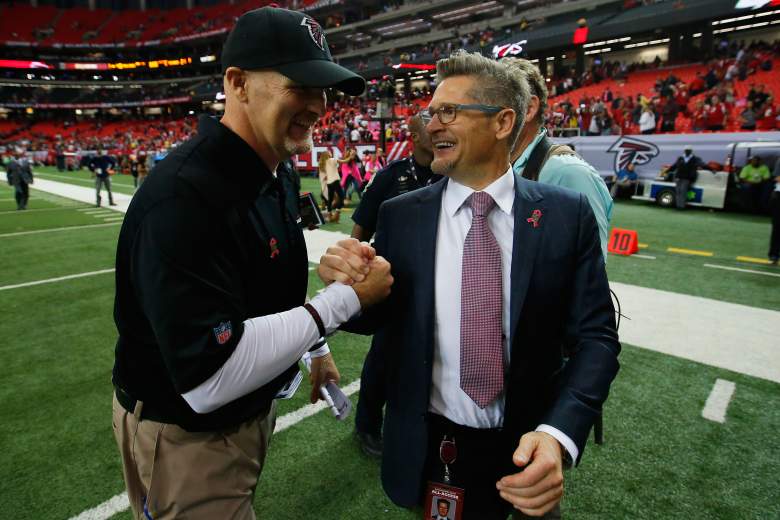 The Atlanta Falcons are on the cusp of Super Bowl 51, and a large part of the reason is that the franchise has performed well in several of its recent drafts. 12 players currently listed as starters for the team were drafted by Atlanta, and all of those players were drafted within the past nine years.

Falcons fans can now look back on the last near-decade of Atlanta drafts fondly, especially if the team should defend its home field from the Green Bay Packers on Sunday and reach Super Bowl 51.

There’s been no bigger selection for the Falcons in recent history than their first pick of the 2008 Draft. Selecting third overall, Atlanta took quarterback Matt Ryan out of Boston College. The hopes that he would be the quarterback of their near future have more than been fulfilled.

The rest of the Falcons’ draft picks from that season had comparatively little success with Atlanta, with perhaps the exception of wide receiver Harry Douglas (third round, 84th overall, out of Louisville), who had some decent seasons with the Falcons. Ryan is the only member of that draft class who is still with the Falcons today, but he makes this draft a success all on his own.

This draft could be considered the first roll of the dice that didn’t favor the franchise. None of the players taken by Atlanta during this draft survive with the team to this day. The Falcons took defensive tackle Peria Jerry out of Mississippi with their first pick (24th overall). Atlanta then nabbed two defensive backs, William Moore (2nd round, 55th overall out of Missouri) and Chris Owens (3rd round, 90th overall out of San Jose State) with their next two picks. None of these players panned out for the Falcons, but that lack of success in drafting was short-lived.

With the 19th overall selection this year, Atlanta selected linebacker Sean Witherspoon out of Missouri to strengthen its defense. Witherspoon is still with the team, but is no longer in a starting role as he has totaled just eight sacks in 65 career games. Only Witherspoon is still a Falcon out of this draft class, but he still represents an improvement over 2009 and a foreshadow of even greater success coming shortly.

Three years after drafting Ryan, Atlanta started to assemble his current supporting cast on offense. With their first pick (sixth overall), the Falcons secured wide receiver Julio Jones out of Alabama. Atlanta also took running back Jacquizz Rodgers in the third round (145th overall out of Oregon State), who had some short-lived success with the team. Kicker Matthew Bosher (sixth round, 192nd overall out of Miami Florida) is still with the team as well.

Like the 2009 draft, this year’s class could be considered a miss for the Falcons. Again, none of the players selected this year are currently with Atlanta. The Falcons’ first pick wasn’t until No. 55 overall, and they took center Peter Konz out of Wisconsin. This disappointing draft was followed by some improvement, however.

The pattern of missing badly, then having some moderate success, then hitting a home run proved true again for the Falcons this year.

The Falcons spent their first pick on offensive tackle Jake Matthews (sixth overall out of Texas A&M), who is part of the group that has kept Ryan upright all season long. Matthews has also been paving the way for one of his draft classmates, running back Devonta Freeman (fourth round, 103rd overall out of Florida State) since the pair was drafted. Defensive lineman Ra’Shede Hageman (second round, 37th overall out of Minnesota), cornerback Ricardo Allen (fifth round, 147th overall out of Purdue) and linebacker Tyler Starr (seventh round, 255th overall out of South Dakota) were also part of this draft.

Running back Tevin Coleman (third round, 73rd overall out of Indiana) and wide receiver Justin Hardy (fourth round, 107th overall out of East Carolina) are still Falcons as well.

Linebackers De’Vondre Campbell (fourth round, 115th overall out of Minnesota) and Deion Jones (second round, 52nd overall out of LSU) have broken into the starting lineup, as has safety Keanu Neal (first round, 17th overall out of Florida). Tight end Austin Hooper (third round, 81st overall out of Stanford) has played in 14 games for Atlanta, making three starts.

While some key role players for Atlanta this season aren’t Falcon draftees, like wide receiver Mohammed Sanu and center Alex Mack, the majority of the key players for Atlanta in the 2016-17 season were drafted by Atlanta. The success that the Falcons are seeing on the field now is a direct result of success in the draft war room years in advance.