The Dallas Cowboys take on the Green Bay Packers in a rematch of the 2015 NFL playoffs. You know what that means. A week long discussion about whether or not Dez Bryant did indeed make the catch late in the fourth quarter the last time these two teams faced each other in the postseason.

The Cowboys were trailing 26-21 at the time and the pass was initially ruled complete with Bryant down on the one yard line. It was later overturned, and the Cowboys went on to lose the game.

It appeared Bryant had the ball took two to three steps and went to the ground when the ball popped out. The initial ruling was overturned as it was deemed Bryant did not maintain control of the football when he hit the ground.

They say time heals all wounds, but Cowboys fans are still hurting over this play two years later. Bryant and the Cowboys have an opportunity for redemption at AT&T Stadium on Sunday. Dallas enters the contest as a four point favorite.

Here’s a look at some of the best memes from Twitter:

This is my favorite #StraightOutta meme so far hey @DezBryant you didn't catch it pic.twitter.com/uMeogC6gZF

I wonder if I have to submit a formal apology to #DezBryant to get unblocked from his Twitter feed? It's just a meme. pic.twitter.com/uU5CjWbwL5

this is the best #DezBryant MEME yet… IF THE BALL HIT THE GROUND…. #johnnycochran pic.twitter.com/CYcRDi402R 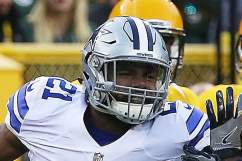 Read More
Dallas Cowboys, Dez Bryant, NFL
Relive the infamous Dez Bryant "catch" one more time as the Cowboys prepare for a playoff rematch with the Packers. Was it a catch? You decide.