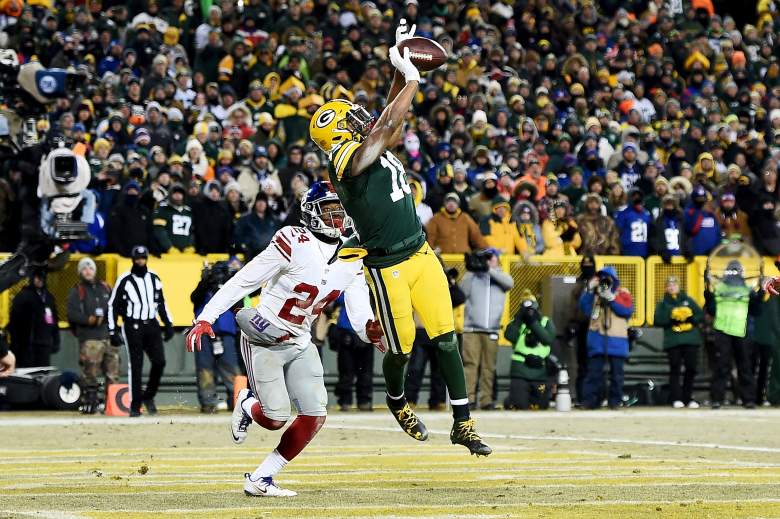 Cobb caught three touchdown passes, which ties the NFL record for the most in a playoff game, and Aaron Rodgers threw for 362 yards and four touchdowns in Green Bay’s 38-14 victory over the Giants. Cobb’s first touchdown reception came on the last play of the first half, as he caught Rodgers’ Hail Mary pass to give Green Bay a 14-6 halftime lead. The Packers outscored the Giants 24-7 in the second half, and New York struggled to establish much of anything offensively after getting off to a solid start.

Eli Manning threw for 299 yards and one touchdown, and his lone interception came in the game’s final minute. Manning was hurt in part by his receivers, with their being multiple dropped passes by both Odell Beckham Jr. and Sterling Shepard. But as the game wore on Green Bay’s front seven got stronger, and offensively Rodgers and company found their groove after getting off to a slow start. Next up for Green Bay is Dallas, with the Cowboys going an NFC-best 13-3 during the regular season.

10:55 remaining, first quarter: The Giants received the opening kickoff, and on 3rd and 6 Eli Manning hit Victor Cruz for a 17-yard catch and run. The Giants followed that play with another first down, with Manning connecting with Odell Beckham Jr. to move into Green Bay territory. Manning found Beckham on 3rd and 5, but the pass was dropped and the Giants decided to punt from the Packers’ 35-yard line.

9:30 remaining, first quarter: Green Bay took over at their own 6-yard line, with the drive including a pass to tight end Jared Cook for seven yards on second down. Aaron Rodgers looked to connect with Cook again on 3rd and 2, but Landon Collins broke up the deep ball to force a Green Bay punt. Giants cornerback Dominique Rodgers-Cromartie left the game with a bruised right quad during the series, and he is listed as questionable to return.

5:44 remaining, first quarter: Manning once again hits on a third down play, this time connecting with Sterling Shepard for a 26-yard gain on 3rd and 3. On the next play Manning looked to connect with Beckham again, but for the second time Beckham dropped a pass, and this one would have been a touchdown if caught. The Giants gained 14 yards on the next play, moving into the red zone thanks to a pass from Manning to Shepard. Robbie Gould would make a 26-yard field goal to open the scoring, and he’s now 18-for-19 in his career at Lambeau Field.

2:09 remaining, first quarter: Green Bay picked up a first down, with Rodgers connecting with Jordy Nelson for a 13-yard gain. New York was unable to get to Rodgers, who was able to wait for Nelson to get open on the play. On 3rd and 10 Janoris Jenkins was called for pass interference, moving the Packers into Giants territory at the 30-yard line. A sack for Coty Sensabaugh on 2nd and 11 pushed Green Bay well out of field goal range. Green Bay was forced to punt, with New York taking over on its own 11-yard line.

0:02 remaining, first quarter: New York was conservative with the football, running the ball three straight times before punting it away to the Packers. Rashad Jennings ran for ten yards on 3rd and 11 to get the Giants a little better field position on the punt. New York finished the quarter with 105 yards to just seven for Green Bay.

14:40 remaining, second quarter: The offensive struggles continue for the Packers. Rodgers was sacked on first down, and after two more unsuccessful plays Green Bay was forced to punt yet again. After losing field position during the latter stages of the first quarter the Giants have flipped the field somewhat thanks to their defense.

11:38 remaining, second quarter: After a 15-yard pass to Shepard to begin the drive, New York would punt four plays later with Green Bay’s Damarious Randall breaking up a pass intended for Shepard on 3rd and 6. Manning’s off to a good start, completing nine of his 14 pass attempts for 103 yards, and he’s had multiple passes dropped (two by Beckham, one by Shepard) thus far. Given their offensive struggles, the Packers are fortunate that this is only a three-point game.

10:11 remaining, second quarter: After completing a pass to Randall Cobb on first down, Green Bay suffered a significant blow as Nelson was hit hard in his midsection by Leon Hall while attempting to pull in a Rodgers pass. Nelson did not return to the field for that series, which ended with a Jacob Schum punt that pinned the Giants inside of their own 10-yard line.

7:24 remaining, second quarter: Manning hit a big play down the field, with a pass to Will Tye going for 51 yards and moving the Giants back into Green Bay territory. But the Giants were unable to do much more after that, ultimately settling for a Gould 40-yard field goal. Gould, who’s responsible for all of the scoring, is now 19-for-20 in his career at Lambeau Field.

.@tye_45 with the catch and then some! ? pic.twitter.com/grfWJlfWtv

4:56 remaining, second quarter: Thanks to a 33-yard kick return by Jeff Janis, the Packers began the drive at their own 45-yard line. And on first down Rodgers found Cook for 16 yards. Nelson is still out of the game for Green Bay. But the drive stalled there, with Rodgers being called for intentional grounding on third down. The penalty knocked Green Bay out of field goal range, forcing yet another punt.

3:45 remaining, second quarter: New York went three and out on this series, with Julius Peppers sacking Manning on third down to force a punt. New York has now failed to convert its last five third downs. Green Bay began its next drive at the New York 38-yard line.

2:20 remaining, second quarter: Rodgers hit Davante Adams for 31 yards to move the ball down to the New York 7-yard line. The two would connect again two plays later, with a scrambling Rodgers finding Adams in the end zone for the game’s first touchdown.

1:46 remaining, second quarter: On 3rd and 1 the Giants handed the ball off to Bobby Rainey, who didn’t have a chance of getting to the line to gain thanks to the Green Bay defense. The Packers front four won the battle up front, stopping Rainey for no gain as a result.

0:00 remaining, second quarter: Green Bay put seven more points on the board in spectacular fashion, as Rodgers’ Hail Mary was caught by Cobb on the final play of the half. Cobb got behind the crowd of players that included a host of Giants defenders, none of whom made the best effort to knock the ball down, and caught the pass without having to adjust for a deflection.

Rodgers ended the half with 155 yards and two touchdown passes, completing 11 of his 22 pass attempts. Manning, who cooled off throughout the course of the half, completed 13 of his 21 passes for 170 yards and no touchdowns.

13:30 remaining, third quarter: Nelson has been ruled out for the remainder of the game with a rib injury. New York forced a three and out on the Packers’ opening drive, a much-needed stop for the Giants defense given how things ended in the second quarter.

10:10 remaining, third quarter: The Giants picked up two first downs, one of a Paul Perkins run and the other on a pass from Manning to Beckham, but they couldn’t build on that and ultimately had to punt the ball away. The Giants offensive line has had some issues of late blocking for Manning in obvious passing downs.

Green Bay second possession: Green Bay turned to Christine Michael at the start of the drive, handing the ball off to him four consecutive plays for 27 yards. But on 3rd and 1 at their own 42-yard line, Green Bay was stuffed at the line of scrimmage by the Giants’ front seven. Packers head coach Mike McCarthy kept the offense on the field, and the Giants stopped Ty Montgomery for a loss of two to take over on downs.

5:16 remaining, third quarter: Two plays after getting the stop on third down, the Giants reached the end zone as Manning hit Tavarres King for a 41-yard touchdown pass. Green Bay corner Damarious Randall covered the play as if he was expecting safety help to the inside. But with Haha Clinton-Dix covering the slant run by the slot receiver, there was no safety help. Instead of going for a two-point conversion that would have tied the game, New York took the extra point, cutting the margin to one point.

2:04 remaining, third quarter: A Bobby Rainey mistake on special teams, fielding the kickoff near the sideline and having him momentum take him out of bounds as the 3-yard line, put the Giants in a tough spot from the start. New York went three and out and punted the ball back to Green Bay, which has found its groove offensively.

0:25 remaining, third quarter: Green Bay took advantage of good field position, driving 23 yards in five plays with Crosby making a 32-yard field goal to make the score 24-13. Green Bay wanted a pass interference penalty called on 3rd and 10, but the officials rules that Coty Sensabaugh did not interfere with Cobb while defending the pass.

14:33 remaining, fourth quarter: The Giants went three and out, with a Manning pass to Beckham on 3rd and 11 hitting the receiver’s fingertips. Beckham’s had a tough evening, as to this point he has four reception for 28 yards but has been targeted 11 times. New York once again looks to its defense, which likely has to force a turnover at this point.

Giants not on "the boat":
114 receiving yards, 1 TD on 8 targets@TreySongz

9:19 remaining, fourth quarter: Green Bay is, barring an incredible comeback, headed to Dallas to face the Cowboys next week. Rodgers found Cobb for a third touchdown, with this one being a 16-yard pass. Mason Crosby’s PAT capped the ten-play, 80-yard drive to make the score 31-13. Rodgers has not thrown an interception since Week 10.

8:31 remaining, fourth quarter: A Manning fumble was picked up by an alert Clay Matthews, who knocked Giants running back Paul Perkins away from the ball before gaining possession. Unless the Giants defense can force a turnover, this one’s about done. 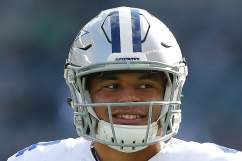