CBS Sports sideline reporter Tracy Wolfson will be at court side with Jim Nantz, Bill Raftery and Grant Hill to cover the 2017 NCAA Men’s Basketball Championship on April 3. Wolfson is married to David Reichel and the two have three sons.

Wolfson first joined CBS Sports in 2004 and is currently the lead sideline reporter for the network, covering both basketball and football. She has also anchored the CBS Sportsdesk.

Here’s what you need to know about Wolfson’s husband and her family.

The 42-year-old Reichel and the 41-year-old Wolfson have been married since December 31, 2001. She wished her husband a happy 15th anniversary on Instagram in January 2017.

“Always hard to be away from my family on New Years Eve but makes it even harder when it’s your anniversary. Here’s to 15 amazing years,” she wrote.

2. They Both Went to the University of Michigan, but Didn’t Date Until After Graduation

In a 2016 interview with the New Jersey Jewish Standard, Wolfson revealed that both of them graduated from the University of Michigan. However, they didn’t date until after they graduate.

It looks like she hopes that her children will follow in their parents’ footsteps. On Halloween 2017, two of her sons dressed up as Michigan coach Jim Harbaugh and Jabrill Peppers.

Wolfson graduated from Michigan with a degree in communications and started in television for CBS Sports in 1997 as a researcher. 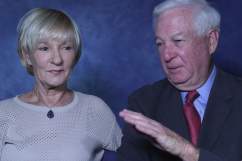 “My family is my real life, and being a mom is my number one priority. I have an amazing job, and I worked really hard to get where I am, and I love it, but I always say that when it doesn’t work out for my family, that’s when I’m out,” Wolfson told the New Jersey Jewish Standard.

“I couldn’t do it without my husband’s support — I travel so much — and without the friends I made in town, and my children’s friends’ parents. I’m so lucky with the relationships I have,” Wolfson continued.

4. The Couple Lives in New Jersey

According to Wolfson’s official website, the couple live in New Jersey with their three children.

Wolfson started her television career in New Jersey. In 2000, she was hired by WZBN-TV in Trenton as a sports anchor, reporter and producer. She went on to work for Oxygen Sports, News-12 Long Island and Long Island News before she joined ESPN in 2002. Her tenure at ESPN was short though, as she left to join CBS Sports in 2004 and she’s been there ever since.

In addition to her work at CBS Sports, she also covers select NBA regular season games and NBA playoff games for Turner Sports. Wolfson has covered everything from tennis and track and field to rodeo and auto racing for CBS Sports. She is currently the lead sideline reporter for CBS Sports’ NCAA Men’s Basketball coverage and is a co-host for CBS Sports Network’s We Need to Talk.

5. Wolfson’s Family Joined Her in Arizona For the NCAA Championship

Wolfson, who has “Family First!” in her Twitter bio, told her fans on Instagram that her family is in Glendale, Arizona with her for the NCAA Men’s Basketball Championship game between Gonzaga and the University of North Carolina.

Wolfson’s Instagram and Facebook pages show that she enjoys traveling with her family, although it doesn’t look like they go to NFL games with her. Sometimes, the kids just have to be at home to go to school.

“I can’t tell you what a morning is like when I’m on the road,” Wolfson told the Jewish Standard. “It is 5 a.m., I’m in San Francisco, and I check in with my sons, I check in to school. I have a great nanny who lives with us — I couldn’t do it otherwise — and it is constant texting with all my friends. ‘Can you pick my son up?’ ‘Who needs a play date?’ ‘Who’s going to the birthday party?’ It’s constant.”