Tiger Woods was arrested in Jupiter, Florida, Monday morning on suspicion of driving under the influence. Woods later issued a statement, saying he experienced a negative side-effect of his prescribed medication. He is due in court for arraignment on July 5.

“I understand the severity of what I did and I take full responsibility for my actions. I want the public to know that alcohol was not involved. What happened was an unexpected reaction to prescribed medications. I didn’t realize the mix of medications affected me so strongly. I would like to apologize with all my heart to my family, friends, and the fans. I expect more from myself, too. I will do everything in my power to ensure this never happens again. I fully cooperated with law enforcement, and I would like to personally thank the representatives of the Jupiter Police Dept. and the Palm Beach County Sheriff’s Office for their professionalism.”

Arrest records from the Palm Beach County Jail show that he was booked at 7:18 a.m. ET and released on his own recognizance at 10:50 a.m. According to the police report, Woods was found “sleepy,” but was “cooperative as much as possible.”

You can read the entire report below or click here.

Police didn’t say if Woods tested positive for alcohol or drugs, but Woods said in a statement that he took a “mix of medications” and he wasn’t aware that they “affected [him] so strongly.”

“I would like to apologize with all my heart to my family, friends and the fans,” Woods wrote. “I expect more from myself too.”

Woods said he “fully cooperated with law enforcement, and I would like to personally thank the representatives of the Jupiter Police Department and the Palm Beach County Sheriff’s Office for their professionalism.”

However, sources told TMZ that Woods was driving a 2015 Mercedes. A member of his team went to the police station to pick up the vehicle.

Law enforcement sources told TMZ that Woods was seen “driving erratically all over the road” and was “arrogant” during the arrest, which Woods disputed in his statement. He refused to take the breathalyzer test, which results in an arrest and license suspension in Florida. Woods’ team has been calling the police station repeatedly to find out if the arresting officer wears a body camera.

Woods was charged with driving under the influence of alcohol or drugs. WPTV reports that Woods was stopped by police at around 3 a.m. on Military Trail South of Indian Creek Parkway. The arrest happened just south of his The Woods restaurant.

Palm Beach County Court documents show that Woods is scheduled to appear in court on July 5. The documents confirm that he was driving a 2015 black Mercedes and was alone at the time. He did not cause a crash or any property damage. He was also cited for “improper parking,” which doesn’t require a court appearance. There are also six witnesses listed, and all are police officers. 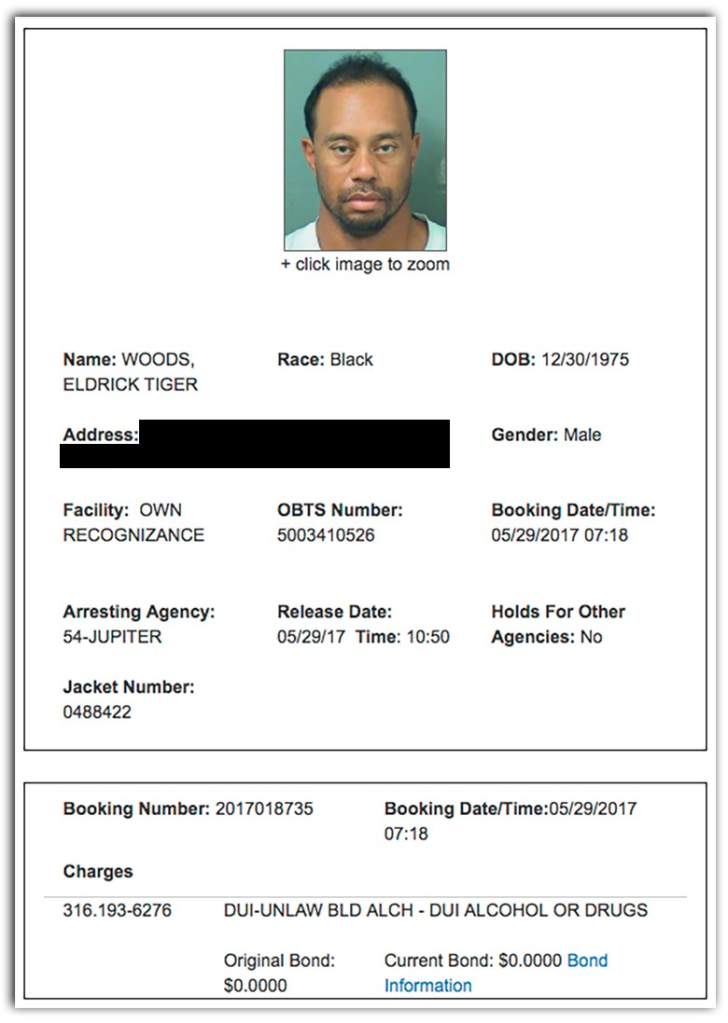 TMZ later reported that Woods’ girlfriend, Kristin Smith, was in Dallas at the time of Woods’ arrest. When she heard about it at a Neiman Marcus store, she “went crazy,” eyewitnesses told TMZ. “I knew it, I knew it,” she reportedly said as she cried and bought $5,000 worth of merchandise.

Woods has struggled to get back into shape after having his fourth back surgery since 2014 in April. As ESPN notes, he said a week before his arrest that he had no plans to retire and wants to play professional golf again.

“I want to say unequivocally, I want to play professional golf again,” the 41-year-old wrote on his website. “Presently, I’m not looking ahead. I can’t twist for another two and a half to three months. Right now, my sole focus is rehab and doing what the doctors tell me. I am concentrating on short-term goals.”

Woods last played in early February in Dubai and missed the entirety of the 2016 season. Although Woods has won 14 major championships, he hasn’t won any since winning the PGA Championship in 2007. He also recently co-wrote The 1997 Masters: My Story, to mark the 20th anniversary of his historic first Masters victory.

Woods had hoped to play in the 2017 Masters, but it wasn’t to be as he is still recovering from back problems.

“He was grinding pretty hard on this one,” Woods’ agent, Mark Steinberg, told ESPN. “Because the Masters has such a special place in his heart, and because it’s been such a special tournament for him, he really wanted to try and be there. And knowing the course so well, the local knowledge, he figured he had a chance to play. He grinded on this up until today.”

During his infamous fight with then-wife Elin Nordegren in November 2009, Woods drove while reportedly under the influence of Ambien and struck a fire hydrant and a tree. As the New York Post noted at the time, Woods fell onto the street, blood and unconscious. Their neighbors found Nordegren carrying a golf club and two windows of Woods’ car broken. Woods was not arrested for DUI at the time. He apologized for cheating on his wife and got a divorce from Nordegren in 2010.

In Florida, a person can be charged with suspicion of DUI if their blood-alcohol level is .08 or above. For the first DUI conviction, the driver can receive a fine between $500-$1,000; 50 hours of community service; probation for up to a year; not more than six months in prison; and/or a license suspension for up to a year. If the driver’s blood-alcohol level is .15 or higher, the driver could be sentenced to up to nine months in prison for a first conviction and/or a fine between $1,000 and $2,000.

Read More
Florida, Golf, Tiger Woods
Tiger Woods was arrested on suspicion of DUI in Jupiter, Florida Monday. Police have released his mugshot. Woods said he was affected by his prescription drugs.