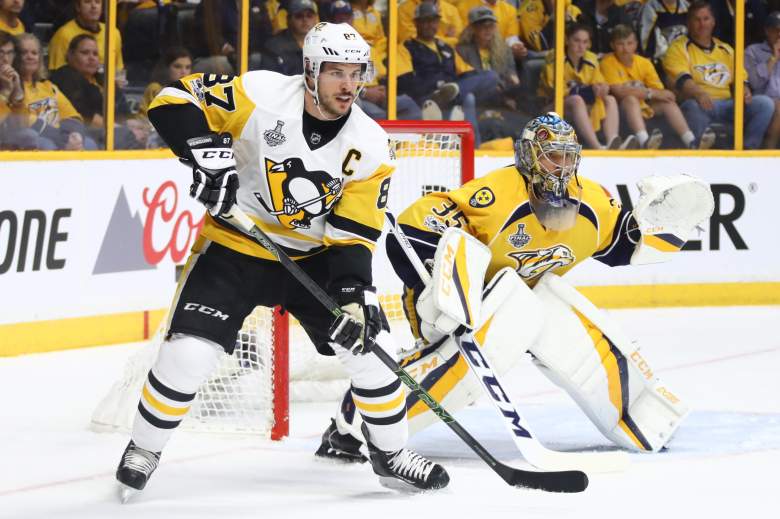 Sidney Crosby and the Pittsburgh Penguins look to solve Pekka Rinne and the Nashville Predators in Game 5 of the Stanley Cup Finals Thursday night. (Getty)

“Do we have a series now?” I asked myself after the Predators took Game 3.

In case there was any doubt prior to Game 4, Nashville did more than enough to answer that question Monday night — taking care of the Pittsburgh Penguins with relative ease, 4-1, and evening the Stanley Cup Finals up at two games a piece.

After Pittsburgh took the first two games of the series at home — one in which the Penguins won with just twelve shots on goal and another where Predators star goaltender Pekka Rinne was pulled — Nashville rebounded on their home ice in Games 3 and 4, setting up the hockey world for the all-important 2-2, Game 5 matchup.

That takes place tonight back at PPG Paints Arena in Pittsburgh, where Sidney Crosby and company will look to get back on track after being thoroughly outplayed on the road by the pesky Predators, who were buoyed by their ridiculous, yet awesome crowd.

Let’s take a look at the odds, puckline, and over/under for Game 5:

What the numbers tell us is that Vegas likes the trend of the home team winning to continue, taking Pittsburgh in Game 5.

The fact that the puckline and moneyline are pretty much returning to where they were at the onset of the Stanley Cup Finals shows Vegas has no idea where this thing is heading. And that’s fair because this series has been bizarre, despite home teams holding serve through the first four.

For example, in the first two contests, Nashville’s star goaltender Pekka Rinne — who prior to the Stanley Cup led the NHL in goals against average for the playoffs — had allowed eight goals on only 36 shots. That was good for a abysmal .777 save percentage.

But back on home ice at Bridgestone Arena, Rinne gave up a total of two goals on 52 shots, logging a .962 save percentage.

Depending on which Rinne we get in Game 5 will go a long way in determining who hoists Lord Stanley’s Cup as early as Sunday.

Along with Rinne appearing to round into form, the Predators received much better play from forward Viktor Arvidsson — who tied for the team-lead in points during the regular season — in Game 4. After receiving a beautiful one-handed pass from captain Mike Fisher, the dynamic Swede buried a breakaway goal glove-side on Matt Murray to extend the Predators lead to 3-1.

Prior to Game 4, Arvidsson had just two assists and was a -4 in the Stanley Cup Finals.

His production, however, had been replaced with that of 24-year-old rookie Frederick Gaudreau — who doesn’t even have his own locker. He’s netted three goals so far this series after having played just nine career regular season games, in which he was held scoreless. 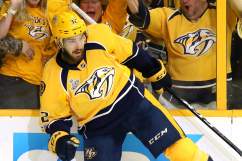 Meanwhile, the Penguins need more out of winger Phil Kessel, who was a -2 in 20:53 of ice time Monday night. He’s registered just one assist through the first four games. Good news for Pittsburgh, though, is their best player — Sidney Crosby — is playing like a man possessed. He was everywhere Monday night — leading the team in shots on goal with four — and scoring a spectacular, back-handed, breakaway goal on Rinne for their lone tally.

Sidney Crosby Breakaway Goal vs. Preds in Game 4Watch as Crosby makes a great move on a breakaway and scores his first of the series in game 4 against the Predators (NBC Call). I don't own this clip, all credit to the NHL, no copyright intended. Thanks for watching, subscribe for more sports highlights!2017-06-06T01:23:34.000Z

Goaltending — just like anything else in sports really — is about confidence. And after doing his job in Games 3 and 4, Rinne should have that confidence back, even with the Penguins crowd bearing down on him. But with Rinne at the top of his game be enough for the Predators to steal Game 5 on the road and head back to Nashville with a chance to win the franchise’s first Stanley Cup on Sunday?

We’re skeptical as the Penguins are 9-3 at home this postseason and seriously, Crosby looks like he’s about to just take this thing over. Hey, maybe even Kessel will get it going. He’s too dynamic of a scorer to go any longer without a goal.

Let’s go with Pittsburgh in Game 5 but in a low-scoring affair as Rinne should be able to keep Nashville close Thursday night.