Jon Rahm is a top option for FanDuel lineups at the U.S. Open. (Getty)

There’s no better week in daily fantasy golf than when a major tournament rolls around, and this week the U.S. Open is upon us at Erin Hills.

Building a FanDuel lineup is quite a bit different than DraftKings, as you’ll choose eight players instead of six. The pricing is also quite a bit different, and you’ll be able to find value all the way down around the $4,500 price range in some cases. When building here, it’s more important to get as many players through the cut as possible, because that could be the key to a big payday.

But when building lineups, your focus for big tournament play should be on finding one or two of the studs (or even sleepers) who have a real chance to take home a victory or finish in the top 10. With that said, at a brutal course like Erin Hills, filling out a lineup will be filled with tough choices and decisions that may leave you scratching your head.

Let’s dive right into my ideal FanDuel lineup, which features one or two values and one or two studs as well.

As you can see, tacking one or two expensive players on there is going to leave you with some tough decisions, but that’s the model that FanDuel offers. I was torn between Jon Rahm and Dustin Johnson, but Johnson’s price tag is $800 more, which really comes into play when building lineups here. Plus, Rahm is one of my favorite plays of the week, his game fits this course perfectly and I believe he pushes for a victory on Sunday.

Adam Scott was second at the St. Jude Classic in strokes gained, tee to green and has had his fair share of success at the U.S. Open. Back in 2014 he finished T9 and in 2015 was T4. To go along with that, his success in 2017 at big events, including a T9 at the Masters and T6 at The Players is enough to make me believe that this may be his breakthrough event.

For Kevin Kisner it’s hard to argue with his recent success. In his past two events, he’s finished in 6th at the Memorial and won the Dean & Deluca Invitational. Tack on the fact that he finished 12th at least year’s U.S. Open and Kisner could very well be a top-10 candidate or higher at Erin Hills.

Here’s where it started to get a bit more interesting, as the values begin to come into play. But, Byeong Hun An is one of the best overall values at the U.S. Open this year. He hasn’t missed a single cut this year and has finished in the top 33 or higher in five of the last six events. He also has a 5th place finish at the AT&T Byron Nelson and 8th place finish at the Wells Fargo Championship. That kind of consistency at $6,800 is nice.

Tim Keeney broke down Peter Uihlein as a potential sleeper pick and explained the situation perfectly. He pointed out that in the last 12 weeks, he’s fourth in the field in strokes gained off the tee, joining names like Dustin Johnson, Jon Rahm, Rory McIlroy and Sergio Garcia. That’s excellent for this course, and at $5,900 we aren’t expecting him to actually contend for the win, but just making the cut and finishing top 20 or top 25 would be more than enough.

Ross Fisher has been on complete and total fire as of late, with three top-10’s and a T22 in his last five starts. He’s ranked 28th in strokes gained off the tee, third in proximity from 200-plus yards and 11th in strokes gained tee to green over the last 12 weeks. These are great stats for a player at $5,900 and options like this are what allows pairing up Rahm with Scott and even being able to add Kisner in the mix.

Finally, comes our biggest sleeper of the bunch in David Lingmerth. It’s a bit of a flier, but based on his recent play, it’s one where he could certainly be expected to make the cut and do some damage in the weekend. Lingmerth has made four-straight cuts with three top-18 finishes. Also, he finished 12th at the U.S. Open in 2016 and 17th in the only other Open event he played in back during the 2013 season. 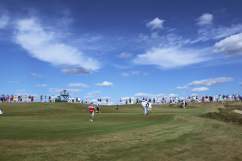 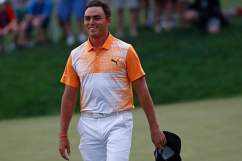