The 2017 U.S. Open will be played at Erin Hills, which features a mix of brutally tough holes, quite a few bunkers and plenty of areas for concern on each hole. While the course has plenty of tough holes to navigate, these listed below make up a mix of the toughest and most intriguing of the bunch.

Let’s kick it off with a mammoth 660-yard, par five hole that should wind up causing even some of the world’s best golfers to struggle.

18th hole, 663 yards from the Black tees. With 4 and 6 as real possibilities, will this be the scene of a dramatic two-shot swing in June? pic.twitter.com/T9749OYMYa

This hole may be the toughest of any at Erin Hills. As Golf Course Gurus labeled it, this is a “bogey beware” hole, and making it to the green in two shots simply isn’t happening. It’s so bad that if the wind isn’t working in your favor, you could actually struggle to hit the green in three shots. To navigate this hole and avoid a bogey, players will need to be on top of every facet of their game. Otherwise, as the article says, this hole is a bogey waiting to happen.

The 9th hole, dubbed "the game's shortest par 5" by our caddies. Miss the green and you will know why! pic.twitter.com/llXG9rj00f

When a hole features a 26-foot drop in elevation, there’s obviously going to be some issues. To go along with that, the hole is laced with bunkers on each side of the green, so if a player happens to miss the green even in the slightest, they could be dealing with a brutal lie. The wind is going to play into how this hole goes for players early on, because if it’s swirling, then bogeys and possibly worse could be an early theme here. Even at just 165 yards, hole No. 9 at Erin Hills is a fans dream to watch, and a bit of a nightmare for many golfers. 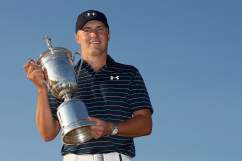 Jordan Spieth at the U.S. Open: 5 Fast Facts You Need to Know

The 4th hole at Erin Hills doesn’t just have rough laced along the fairway, it also has bunkers right in the middle of it as well. If there’s a single hole at this course where you really don’t want to miss hit your tee shot, then this is likely the one. And if the brutal outskirts of the fairway weren’t enough, the shallow green doesn’t make life any easier.

7th hole: At 607 from the Black tees, the 7th is a true three-shotter for us mortals, with plenty of trouble from tee to green. pic.twitter.com/yxoXkMCCLr

Another monster of a hole on the course at Erin Hills is the 607-yard beast that is hole No. 7. Heavy rough, bunkers, lighter rough, dips throughout the hole and anything else you can imagine are all over this hole. The trouble areas don’t just lie on the sides of the fairway either, because almost anywhere that a player’s tee shot goes can wind up hitting a hazard area. When golfers do finally make it to the green, there’s a slope to the right that will create a putting nightmare.

14th hole, 613 yards from the Black tee: As a strategic, gambling par-5 in the middle of the back nine, this will be fun to watch in June! pic.twitter.com/ka1XMOqwNK

A FOX Sports breakdown of hole No. 14 may have described this hole best. It states that the green is “reachable in two for the player that wants to shoot over a swath of rough and contend with bunkers short and long.” As they point out, falling shy of the green in two shots and opting to lay up could very well leave you staring at a massive hill in front of your face. There’s nothing enjoyable about the homestretch of Erin Hills, and this hole won’t leave golfers feeling excited about the previously-mentioned 18th hole. 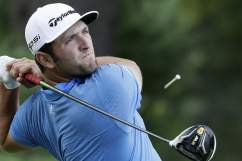