Getty Dak Prescott was 7-of-8 for 106 yards and a touchdown against the Rams.

Several of the Cowboys stars made their preseason debut, and impressed in Dallas’ 24-19 victory over the Colts. Dak Prescott looked crisp going 7-of-8 for 106 yards and a touchdown.

Prescott connected with Dez Bryant for a 32-yard touchdown. Bryant had two receptions for 55 yards. Both Cowboys running backs looked good as Ezekiel Elliott did not play. Darren McFadden once again started with the first-team offense. McFadden finished with nine carries for 59 yards.

Alfred Morris contributed early as well with nine carries for 49 yards. Even third-string running back Rod Smith got in on the action with seven carries for 53 yards.

Scott Tolzien got the start at quarterback for the Colts as Andrew Luck continues to recover from off-season shoulder surgery. Tolzien looked solid going 10-of-14 for 70 yards.

Rookie running back Marlon Mack had five carries for 45 yards.

Here’s a look at the Cowboys-Colts highlights.

Dak Prescott Connected With Dez Bryant for a 32-Yard Touchdown

After connecting with Bryant on the very first pass of the game, Prescott found his number one target for a 32-yard touchdown pass. While the cornerback miss timed his jump, Bryant leaped in the air to bring the ball down and run into the end zone. It was the first preseason appearance for both Bryant and Prescott.

And that's EXACTLY what he just did.
Touchdown, @COLTS! #INDvsDAL pic.twitter.com/qC73HLnwKP

Smith had an early impact by recording his first NFL tackle. While there were times that Smith did not look all the way back, Smith was active early and often. Cowboys fans can expect him to have a big impact on a defense that has been hit hard with suspensions.

Both Cowboys Running Backs Got Off to Hot Starts

After underwhelming in last week’s preseason game, McFadden and Morris both looked good in the first half. McFadden again got the majority of first-team reps with nine carries for 59 yards. Morris was also active and looked good as the two running backs continue to compete for carries. McFadden did cough up the football, but it did not result in a turnover after a Colts penalty.

Two rookies connected to put the Cowboys up 17-13 in the third quarter. Cooper Rush threw a 19-yard touchdown pass to Noah Brown. Rush has looked like the best backup quarterback on the roster early in the preseason, but he has been playing late in games against mostly backups. Brown is fighting to make the roster, but is a talented wideout from Ohio State.

Do your dance, Fred Brown, do your dance ?#INDvsDAL pic.twitter.com/VDHOO0ONqi

Stephen Morris found Fred Brown in the front corner of the end zone to bring the Colts within five points. Brown tip-toed his way to the TD getting both feet in bounds. The Colts two-point conversion as well as their onside kick attempt were unsuccessful. 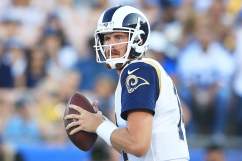