Sean Mannion connected with rookie wide receiver Josh Reynolds to give the Rams a 24-21 victory over the Raiders. While there was still a minute remaining, the Raiders were unable to answer with a score of their own.

There is reason for optimism from both fan bases after the preseason matchup. Both first team offenses were firing on all cylinders. Jared Goff was 16-of-20 for 160 yards and a touchdown. Derek Carr was 7-of-9 for 100 yards, two touchdowns and an interception.

The Rams rookies continue to impress. Receiver Cooper Kupp had six receptions for 70 yards and a touchdown. Sammy Watkins made his Rams debut with two catches for eight yards.

For the Raiders, Amari Cooper made several impressive catches and finished the night with three receptions for 46 yards. Marshawn Lynch also looked good in limited action.

Here’s a rundown of the Rams-Raiders preseason game.

Kupp continues to impress as the Raiders defense bit on Goff’s play-action fake. Kupp dominated at Eastern Washington, but there were questions on how the rookie wideout would transition to the bigger NFL stage. So far, so good.

After a couple electric runs from Marshawn Lynch, the Raiders answered the Rams touchdown drive with a score of their own on Oakland’s first possession. Carr found Lee Smith over the middle of the field for a touchdown. Smith held on for dear life as he took two big hits across the goal line.

As Carr looked to shake off some of the rust, he threw an early interception. Instead of throwing the ball away in the midst of a Rams pass rush, Carr threw the ball into the middle of the field where there were two Rams defenders. Given Carr spent much of the off-season recovering from a broken leg, it could take him a few games to return to form.

The Rams looked solid early on as they scored two first quarter touchdowns. Gurley found the end zone on a three-yard run, and the Rams took an early 14-7 lead.

Carr found Michael Crabtree on a quick pass inside the red zone. Crabtree juked the defender who literally fell down on Crabtree’s way to a 13-yard touchdown. The Raiders tied the game at 14. Here’s a look at Crabtree’s move:

It is hard to take too much from two runs, but Lynch looked good in his Raiders debut. Lynch had two carries for ten yards on the Raiders opening drive. He displayed a quick burst on the runs, looking a bit like the Beastmode of old. Lynch only played in the Raiders first series.

Connor Cook threw an 18-yard touchdown pass to Johnny Holton to give the Raiders a 21-17 lead late in the fourth quarter. It was Oakland’s first lead of the second half.

Josh Reynolds caught a beautiful touchdown pass from Sean Mannion to give the Rams a 24-21 lead with 1:11 left in the game. It would turn out to be the game-winning touchdown for the Rams. Reynolds is another one of the Rams promising rookie receiving options. 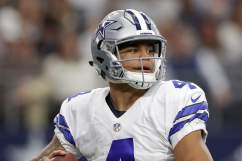 Read More
Football, Las Vegas Raiders, Los Angeles Rams, NFL
The Los Angeles Rams came away with a comeback victory over the Oakland Raiders. Watch all the big plays and find out how the Rams got the win.