Louisville basketball coach Rick Pitino was the target of an extortion scheme in 2009, which lifted the veil on his extramarital affair with Karen Cunigan Sypher. Over a year after he publicly announced he was the target of her scheme, she was convicted of extortion and lying to federal agents. In July 2017, she was released from prison, but remains under federal supervision.

Between April 2009 and August 2010, the scandal and trial dominated headlines in the sports world. Although Pitino admitted to the affair, he stayed on as coach of Louisville, ultimately coaching the team to the 2013 NCAA Division I Championship. In 2013, he was inducted into the Basketball Hall of Fame.

Here is a look at the 57-year-old Sypher and the scandal.

1. Sypher Claimed Pitino Raped Her, But Pitino Said He Had Consensual Sex With Her

Pitino announced in April 2009 that he was at the center of an extortion scheme and called on the FBI to investigate the case.

Days later, the Associated Press reported that Sypher, who was estranged from equipment manager and husband Tim Sypher at the time, was arraigned in federal court on extortion charges and lying to the FBI. The federal complaint claimed she tried to get Pitino to pay for her children’s college tuition and cars, then asked for $10 million.

In July 2009, Sypher reported to police that Pitino raped her twice in 2003. But the Courier-Journal reports that Pitino claimed he only had sex with Sypher once. That happened on August 1, 2003 at a Louisville restaurant.

Pitino also admitted to police that he gave Sypher $3,000 to have an abortion. During the trial, Pitino testified that they had a sexual encounter that was “very” brief. 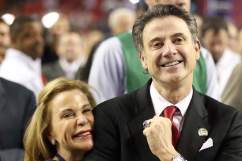 2. Sypher Told Police Her Husband Tim Cypher Was ‘Paid to Marry Me’ in 2004

Police records also showed that Sypher claimed to police that her husband Tim was “paid to marry me,” reports Kentucky.com. She told police that during a July 13, 2009 phone call.

They married in 2004 and have a daughter, who was four years old at the time of the controversy. Pitino said that the custody case was the reason why Tom hadn’t made any public remarks.

During the trial, Tim Sypher did take the stand and called her “nuts.” WAVE3 reports reports that he told the jury that he met Sypher, when she was known as Karen Wise, in 2003 and heard about her through Pitino. He also testified that he helped her get the abortion at a Cincinnati clinic, and that Pitino gave her the $3,000 because she didn’t have health insurance.

They married in April 2004 and their marriage was fine for a while. But in 2007, when money got tight, things changed. “All of a sudden, she started yelling rape. He raped me,” Tim Sypher testified.

In February 2009, Pitino got a threatening voicemail from a man who claimed to know what happened in 2003, Tim Sypher testified. Sypher told him and Pitino that she didn’t know who the man was, he testified. He also said Sypher gave him a list of demands in March 2009. Tim Sypher gave the demands to his boss, Pitino, even though he didn’t really want to. (The man later turned out to be Lester Goetzinger.)

“She’s nuts,” Tim Sypher said of his estranged wife on the stand.

3. Her Divorce Lawyer Dana Kolter Also Testified That They Had an ‘Intimate Relationship’

Other men testified that they had relationships with Sypher, including her former lawyer, Dana Kolter. Deadspin reported that jurors were even shown photos of them having oral sex.

The relationship with Kolter began in 2007, while Sypher was already starting divorce proceedings. On Valentine’s Day 2008, she arrived in his office and they had oral sex. She agreed to let him take the photos, which were entered into evidence. At the time, Kolter was also married.

WAVE3 reported that Sypher said she told the FBI she didn’t have an affair with Sypher. He told the court he was “branded” with an “A” for adulterer and that Sypher told her about being allegedly raped by Pitino.

“It was one of the weirdest things I’ve ever seen,” Kolter said of Sypher’s divorce proceedings and the Pitino case. Kolter also testified that Tim Sypher had “control” over his wife.

“I could she a psychological break from this cage they put her in,” Kolter said of Sypher. “Her eggs were scrambled.” 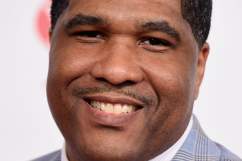 4. Lester Goetzinger Testified That Sypher Told Him About Pitino Impregnating Her & She Performed Oral Sex on Him

Another important player in the scandal was Lester Goetzinger, a friend of Sypher’s. It turned out that he was the one who placed the extortion calls on her behalf in February 2009. He testified that she told him Pitino raped her twice, impregnated her and she had an abortion. He testified that she gave him Pitino’s cell phone number and he made three calls, leaving three anonymous voice messages. Sypher later told the FBI that she was involved in Goetzinger placing the calls.

Kentucky Sports Radio reports that Goetzinger also admitted that he also had a romantic affair with Sypher. He testified that their relationship dated to 1994 and they met when he installed gas service at her house.

Like Pitino and Kolter, Goetzinger was married too. In 1999, their relationship became sexual, even though he gave her $10,000 during their relationship. Before he placed the first call to Pitino, Sypher went to Gotezinger’s house and performed oral sex on him. After that, she told him about the Pitino claims, he testified.

The three calls were all played to the jury. The third call was placed 10 days after the first one. “Within two weeks, media will be notified of all the evidence and details of the rape,” Goetzinger said in the last call.

Goetzinger said the last time they talked was a few days after he placed the third call. He testified that she told her, “I need to find out what to do about these phone calls that you made.” 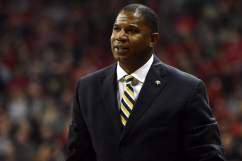 In August 2010, Sypher was convicted and in February 2011, Sypher was sentenced to 87 months in prison, the Associated Press reports. The charges came with a maximum sentence of 26 years.

After six years, five months and 11 days, Sypher was released, USA Today reports. Her sentence expired on July 28, 2017. However, she will still have to meet with a federal probation officer and needs permission to leave the area. She also has to find a job and avoid excessive drinking. 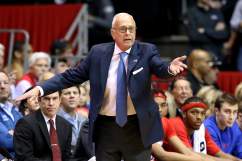