After just one episode, ESPN announced Monday it’s canceled Barstool Van Talk. The show was on ESPN2 in the 1 a.m. Eastern time slot and had its debut episode on the network October 17.

ESPN President John Skipper said in a statement that “effective immediately,” the comedic sports show was removed from the network.

“While we had approval of the content of the show, I erred in assuming we could distance our efforts from the Barstool site and its content,” Skipper said in the statement.

Barstool Van Talk was hosted by personalities Dan “Big Cat” Katz and PFT Commentor, who have a popular podcast called Pardon My Take. It was a satirical show which contained jokes about sports and interviews inside the duo’s staple vehicle, “Vanny Woodhead.”

The cancellation comes after a week of backlash by some viewers and employees at ESPN. Big Cat, PFT and producer Hank released a joint statement following the cancellation, saying they were “very disappointed” to hear the news.

“We had a great time working on the show and were extremely excited about the future,” the statement said. “Thank you to all the Award Winning Listeners/Watchers for supporting us, and thank you to all the great people who worked alongside us at ESPN and Embassy Row.”

A statement on today's news: pic.twitter.com/JyaxG4l5kO

Big Cat tweeted that he was “beyond heartbroken” to hear his show had been canceled.

I'm obviously beyond heartbroken, but if you know me, Hank, and PFT you know we won't stay down from this for long.

PFT, in his typical comedic way, also tweeted his disappointment.

The cancellation comes as a surprise, as the first episode of the show did solid ratings for its time slot, doubling the previous audience compared to a four-week average. It drew more than 88,000 viewers and was the No. 2 show on ESPN2 for October 17, behind ESPN’s First Take, which airs during the afternoon hours.

88K Total Viewers for Barstool's premiere of @barstoolvantalk on ESPN2. 65% were P18-34. My claim is that majority was streamed on OTT.

re: Barstool. not sure this will make sense, but the lead-in stuff is interesting to me pic.twitter.com/ZjAvb6XAAX

In the past, Barstool Sports has received criticism for being at times misogynistic and offensive. On Thursday, Deadspin reported that ESPN wanted the show to distance itself from the history of Barstool Sports, which includes offensive blog posts and some content.

When the announcement that ESPN picked up the show was made, ESPN’s Sam Ponder “welcomed” Big Cat and PFT to the ESPN family by accusing Barstool of calling her derogatory names in the past. Ponder tweeted screenshots of a blog post on Barstool that calls her a “Bible-thumping freak” who’s only on TV to “make men hard.” She tagged Big Cat in the post, saying: “Welcome to the ESPN Family @BarstoolBigCat (& welcome to all ur minions who will respond to this so kindly).”

Welcome to the ESPN family @BarstoolBigCat (& welcome to all ur minions who will respond to this so kindly) pic.twitter.com/AzgfdDx2FK

The post in question wasn’t made by Big Cat or PFT, but still appears on Barstool’s website. It was made on July 2014 by Feitelberg and Barstool president Dave Portnoy. They were commenting on a past Ponder tweet that said: “Blogs/websites that constantly disrespect women and objectify their bodies, then take a strong stand on the Ray Rice issue really confuses me.”

Ponder also referenced a segment from a 2014 podcast called “The Rundown.” In it, Portnoy and Big Cat ranted about Ponder and her job performance. At around the 8 minute mark, Portnoy mentions Ponder “slutting it up.” Listen to the audio from the segment below:

After the first airing of the show, Ponder said she was “disappointed that (ESPN was) promoting a company name that still maintains support for horrific personal attacks against multiple women within ESPN.”

3/4 I can simultaneously admit my own flaws & failings & say yes, I am disappointed that we are promoting a company name that still maintains support for horrific personal attacks against multiple women within ESPN.

4/4 I am speaking up not to say “I am perfect, be like me” but rather “where do we draw a line, what are our standards?” I don’t meet my own standards sometimes. This does not mean we throw the standard away. This means we get better. We speak up. We listen. We get better.

In response to the comments, Burke Magnus, ESPN’s executive vice president of programming and scheduling, called the comments referenced “offensive and inappropriate,” but said the network intended to stick with the 30-minute program.

“As stated previously, we do not control the content of Barstool Sports,” Magnus said in a statement. “We are doing a show with Big Cat and PFT, and we do have final say on the content of that show.”

It’s unclear if Ponder’s criticism led to the cancellation of the show, but Skipper’s statement seems to imply the content she was referring to played a role.

Barstool CEO Erika Nardini defended the show and platform, saying it’s a “comedy brand that’s been on the internet for 15 years and not for everyone.”

There are certain vulnerabilities that come with growing up on the internet. If you want controversies, we have them.

The good, the funny, the bad, the offensive – it's all out there.

We're a comedy brand that's been on the internet for 15 years and not for everyone.

Barstool grew an undeniable audience because it was unafraid to have a hot take, an unpopular opinion or to cross the line.

And it's because of this, not in spite of it, that we were able to create a show like Barstool Van Talk

And put @BarstoolBigCat and @PFTCommenter two of our most talented on ESPN. We can play ball by other people's rules and still be funny.

The show will speak for itself.

Barstool has grown a significant amount recently, but started as a satirical sports and men’s lifestyle blog founded by Portnoy in Milton, Massachusetts over a decade ago. It first launched as a print publication and was distributed in the Boston area to give readers gambling advice and fantasy sports projections. As it continued to grow, it added other components and rose dramatically in popularity.

On January 7, 2016, Portnoy announced that The Chernin Group purchased a 51-percent majority stake in Barstool at a $10-15 million valuation, and it subsequently moved its headquarters to New York City. Part of the agreement was that Portnoy continued running the website and retained creative control over the content.

Barstool Sports Emergency Press Conference – New York, New YorkOk obviously huge news. In all seriousness thank you to all the Stoolies who have been with us for so long. It’s kind of amazing how many people I see who are still like I used to grab the newspaper from your sorry ass outside South Station when you were competing vs. the Spare Change guy. Without our readers who are the best/most insane on the internet none of this happens. And again I can’t stress this enough. Even though I’m not the majority owner of Barstool anymore I’m still 100% in charge of content. This was not my cash out moment. This was our best shot to literally take this thing to the moon. To swing for the fences. The idea to move us all into one office in NYC was my idea. Chernin knows about the Size 6 skinny jean joke. They know about Babygate. They get it. They understand it. They understand what makes us tick and don’t want to change it at all. That’s the only way I’d ever agree to something like this. Hopefully this deal makes us bigger, faster, stronger better at everything we do. Like I said in the press conference. Chapter 1 of the book is done. Chapter 2 is about to begin. Next stop…the moon. I’m gonna go on Periscope to answer any questions Stoolies may have at 3pm for a live Periscope Press Conference. Follow my twitter account @stoolpresidente to join in. And I’m gonna do a Reddit AMA on our reddit page at 7pm as well. I’ve always been pretty transparent with what we’re doing and will answer basically all the questions you guys got about next moves and plans for literal world domination. PS – I’m kinda rich now. Check out Barstool Sports for more: http://www.barstoolsports.com Follow Barstool Sports here: Facebook: https://facebook.com/barstoolsports Twitter: https://twitter.com/barstoolsports Instagram: http://instagram.com/barstoolsports2016-01-07T19:00:00.000Z

According to Alexa.com, Barstool is currently ranked as the No. 414 most popular website in the United States and 2,116th globally.

In early October, Elika Sadeghi, who has been offered a two-year contract with Barstool, said she decided to turn it down because of a clause in her contract. Without disclosing the name of the company, she tweeted the contract and said she refused “for multiple reasons.”

The language said that employee must be comfortable working in an environment where she may be exposed to “offensive speech (e.g. their work, scripts or roles that involve nudity, sexual scenarios, racial epithets, suggestive gestures, profanity and references to stereotypes).

They wanted me to sign this. I refused, for multiple reasons. I ultimately decided I didn't want it, even if I was exempt from signing this. pic.twitter.com/3psAPIvKrQ

Portnoy was quick to defend the contract and Barstool, saying it’s a necessity so the company doesn’t get sued for jokes deemed offensive by employees.

“If we’re sitting in a writing room and we’re tossing around all sorts of jokes and trying to be funny, we definitely make off-color jokes,” Portnoy said. “It’s just to basically know you acknowledge what you’re getting yourself into.” 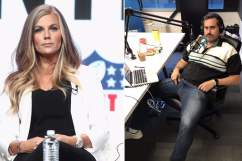 Read More
Breaking News, ESPN
ESPN announced that after just one episode, it's canceled Barstool Van Talk, which aired on ESPN2. Find out the reason for the cancellation.