Getty Justin Turner of the Los Angeles Dodgers celebrates after hitting a walk off three-run home run in the ninth inning to defeat the Chicago Cubs 4-1 in game two of the National League Championship Series at Dodger Stadium on October 15 in Los Angeles, California.

Justin Turner now has a place in Los Angeles Dodgers history. Turner, a 32-year-old third baseman for the Dodgers, hit a walk-off three-run home run to defeat the Chicago Cubs in Game 2 of the National League Championship Series on Sunday.

The huge hit in the bottom of the 9th inning came with two outs against John Lackey, and it broke a 1-1 stalemate. It sent the Dodgers firmly ahead in the best-of-seven series, 2-0, as they try to stop the Cubs from returning to the World Series for the second-straight season.

Turner’s homer was the first Dodgers walk-off in the postseason since Kirk Gibson’s legendary hit in 1988. It sent the fans at Dodgers Stadium into a frenzy and into chants of, “Justin, Justin, Justin” as he was being interviewed by the TBS broadcast.

Watch a video of Turner’s clutch hit below:

It was a storybook moment for Turner, who made his MLB debut in 2009 as a member of the Baltimore Orioles. He also played for the New York Mets, but became a free agent following the 2013 season. He was playing in a Cal State Fullerton alumni game when Dodgers bench coach Tim Wallach took note of him and soon after signed a minor-league contract before being added to the Dodgers’ MLB roster in 2014.

In 2014, Turner had a breakout season and played in 109 games. He led the team in batting that season with a .340 average with 7 homers and 43 RBIs the remainder of the season.

In December 2016, Turner signed a four-year deal with the Dodgers and started this season on a good note, batting .379 before missing three weeks due to injury. He was voted by fans to play in the MLB All-Star Game in July. 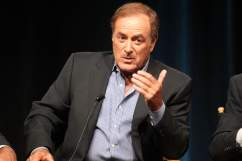