Al Michaels is in hot water for making a joke referencing the outpouring of sexual assault and misconduct allegations recently made against Harvey Weinstein.

Michaels, 72, made the controversial joke during an NBC broadcast of Sunday Night Football featuring the Denver Broncos and the New York Giants. During the third quarter, when recapping the injuries New York suffered during the previous game, Michaels argued that the personnel losses the 0-5 Giants experienced were worse than the growing number of allegations made against Weinstein.

“I mean, let’s face it, the Giants are coming off a worse week than Harvey Weinstein and they’re up by 14 points,” Michaels said to a befuddled Cris Collinsworth. “All you have to do is read the papers.”

During last week’s game, the Giants suffered the loss of Pro Bowl wide receiver Odell Beckham Jr., who broke his ankle and will miss the rest of the season as a result. The Giants also lost three other receivers to injuries during the game, along with a few other players.

A few days before the Giants game, Weinstein was fired from the company he co-founded after dozens of women in the entertainment industry went public with allegations of sexual assault and harassment dating back to the 1980s.

Watch a video of Michaels’ on-air reference below:

The accusations against Weinstein, which some in the entertainment industry say have been common knowledge for some time, were uncovered last week by multiple news outlets. The number of accusers continues to grow and includes actresses Gwyneth Paltrow, Angelina Jolie, Rose McGowan and many more.

In many of the allegations, the women describe being sent up to Weinstein’s hotel room. When they entered, he was often clad in only a bathrobe and made sexual advances toward them. In some instances, women accuse Weinstein of raping them. To read more on the allegations, click here.

On October 8, because of the various reports of sexual harassment and assault, The Weinstein Company fired Weinstein. The company released a statement announcing his termination because of “new information about misconduct.”

Harvey Weinstein has been "terminated" from the Weinstein Company. Full statement: pic.twitter.com/CyHFxpGrrs

Weinstein’s spokesperson Sallie Hofmeister released a statement in response to the recent developments October 10, saying he denies all of the allegations.

Any allegations of non-consensual sex are unequivocally denied by Mr. Weinstein. Mr. Weinstein has further confirmed that there were never any acts of retaliation against any women for refusing his advances. He will not be available for further comments, as he is taking the time to focus on his family, on getting counseling and rebuilding his life. 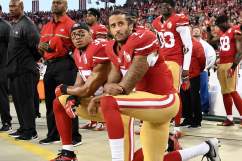