Getty Carson Wentz and the Eagles are one of the hottest teams in the NFL.

The 1972 Dolphins can once again pop champagne as the Steelers upset the Chiefs on Sunday. Kansas City was the only undefeated team remaining, and the Chiefs loss means every team now has at least one blemish.

For the second straight week, Aaron Rodgers is the story, but for very different reasons. Rodgers broke his collarbone against the Vikings putting the rest of his season in jeopardy.

From a power rankings perspective, it was quite the week as four of last week’s top five ranked teams all lost. Given all the upheaval, it hardly feels like there is a dominant team worthy of the top spot.

The Eagles were the closest to knocking off the Chiefs after they won their fourth straight game. However, a closer look at their schedule shows Philadelphia has not been taking on the league’s best each week. While the Eagles did pick up a win against a solid Panthers team this past week, wins against the Cardinals, Chargers and Giants were not against the most difficult opponents.

Kansas City’s body of work is stronger, and the Chiefs beat the Eagles in a head-to-head matchup. Kansas City may not be head and shoulders above the competition, but the Chiefs have done enough to keep the top spot despite their most recent loss.

Here’s a look at this week’s NFL power rankings.

It was an interesting week for the majority of top NFL teams. The Falcons blew a sizable lead at home against the Dolphins. New England survived a scare against the Jets. Green Bay not only lost to the Vikings, but it appears the Packers will be playing without Aaron Rodgers for the foreseeable future.

Some of the hottest teams in the league may come as a surprise. After starting 0-2, the Saints have won three straight games. The Chargers and Bengals have won their last two games as well.

At the bottom of the rankings, the Browns and 49ers are still win-less. Things do not get any easier for the 49ers as they take on the Cowboys, Eagles and Cardinals over the next three weeks. Cleveland faces the Titans, Vikings and Lions.

Meanwhile, the Giants were nearly a two-touchdown underdog against the Broncos on Sunday Night Football. New York shocked everyone by pulling off their first win this season. With Odell Beckham Jr. and Brandon Marshall out for the season, don’t expect this to be the start of a crazy run for the Giants. 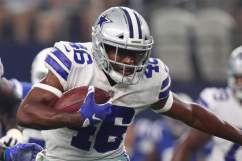 Read More
Football, NFL
With the Chiefs losing their first game of the season, find out what teams are rising and falling in our latest NFL power rankings.