Vasilevskiy got quite a bit of time on the ice after former Lightning goalie, Ben Bishop, found himself injured during the 2016 Eastern Conference final. A short while later, Bishop was traded to the Los Angeles Kings, leaving Vasilevskiy — a 22-year-old kid — as the team’s star. This season, Vasilevskiy is 15-3-1. With his team sitting on top of the Atlantic Division, Vasilevskiy is staying focused, trying not to get ahead of himself.

When he’s not playing hockey, Vasilevskiy is home with his wife and their young son.

“There’s probably guys my age like to go to bars or somewhere else, but not me. I’m not that kind of person. I like to be at home. Just hockey and family, that is my life,” he recently told the Tampa Bay Times.

The Vasilevskiys met on an airplane and ended up talking the whole flight. Ksenia was returning home to Moscow, Andrei was playing for Tolpar Ufa of the Russian Junior Hockey League (MHL) at the time. They exchanged information and started talking on social media, really getting to know one another.

“I found my other half and changed [ideas]. I met Ksenia on the airplane, we were next one another and started talking, then we kept on talking on social networks. And you know the rest,” Andrei Vasilevskiy told The Hockey Writers back in 2014.

Within a year, the two ended up tying the knot. The Russian-born goaltender was just 19 years old at the time.

2. She Lives in South Tampa with Her Husband & Their Son, Lukas

Ksenia moved to the United States from Moscow, Russia, and now resides in South Tampa, Florida.

“[Gentrified] South Tampa is considered by many Tampa residents to be the affluent and hip epicenter of Tampa. The neighborhoods of SoHo, Hyde Park, Bayshore, Davis Island, Palma Ceia, make up the South Tampa area. Bayshore Boulevard is perhaps the most prominent and well-known landmark in South Tampa as it features the longest continuous sidewalk in the world. Peninsular South Tampa is seemingly in the middle of it all; its just a short drive west to St. Petersburg and the beaches, is minutes from Downtown Tampa and the Tampa International Airport and MacDill Air Force base is located at the very south tip of the South Tampa peninsula.”

Prior to landing in their current residence, the couple shared an apartment — without a TV — in Syracuse, New York, while Andrei played for the Lightning’s American Hockey League affiliate, the Syracuse Crunch. It was during this time that the Vasilevskiys welcomed their now-2-year-old son, Lukas, shortly after tying the knot. Ksenia went into labor early — two weeks early, to be exact — and actually gave birth to Lukas whilst her husband was playing. He was informed that he had a son during a post-game meeting in the locker room. At the time, Vasilevskiy was being coached by Crunch Head Coach Rob Zettler, and that’s who ended up breaking the news to him.

“Vasilevskiy was playing for Crunch when baby was born (two weeks early). Found out about it in post-game meeting with Rob Zettler,” Tampa Bay Times Staff Writer Joe Smith tweeted in 2016.

3. She Doesn’t Have Social Media Accounts

Although Tampa Bay’s premiere goaltender has talked about his wife in various interviews, he doesn’t say too much about her or about their son. It’s hard to find photos of Mr. and Mrs. Vasilevskiy, as neither one has a public-facing social media account. They are both extremely private people and hardly share much about their personal lives.

Over the past few years, Ksenia has gotten accustomed to the American way of life, but she prefers to stay completely out of the spotlight. In fact, Mrs. Vasilevskiy manages to stay completely under the radar, even if she attends a game at Amalie Arena.

She spends a lot of time at home with her son and prefers to keep the mainstream attention away from her personal life. She and her husband do a great job at keeping their private lives completely out of the media.

4. She Spends Time with Other Tampa Bay Lightning WAGs

If you do happen to come across a photo of Ksenia Vasilevskiy, chances are she is hanging out with some of her husband’s teammate’s wives. Although she prefers to keep her personal life out of the spotlight, she is extremely supportive of her husband and his career — and she has made some friends through the Lightning organization.

Over the years, Ksenia has been spotted hanging out with Anastasia Kucherov, wife of Nikita Kucherov, as well as other wives and girlfriends of other players.

In 2016, Ksenia attended an ugly sweater Christmas party with several other Lightning WAGs.

You can check out a picture of the event below.

5. Ksenia May Have Worked as a Model Before Moving to the States

Little is known about Ksenia’s wife before meeting her husband. One of her few appearances on social media comes on a discussion board, with her husband as the topic, on the Russian site Vkontakte.

In the course of the 2014 discussion, one user linked to a picture of Ksenia that is watermarked with the url of a Russian modeling website, fashionbank.ru. 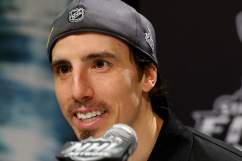