Alex Reimer is a Boston-area sports journalist, known as an on-air personality on WEEI, a sports radio station based in Massachusetts.

Reimer is making headlines this week after he made a distasteful comment about Tom Brady’s daughter while on the radio. Reimer was discussing the first episode of Brady’s docuseries, Tom Vs. Time, on Thursday, January 25, when he called the child an “annoying little pissant.”

Reimer, 25, was suspended from WEEI on Friday, January 26. He has not released a statement or an apology of any kind.

1. He Was Suspended Indefinitely From WEEI & Brady Has Spoken Out About the Comment

They call me Tom Brady. pic.twitter.com/3PlT57kc5g

On Thursday, January 25, Reimer, made a comment about Brady’s daughter, Vivian (her mom is Brady’s wife, Gisele Bundchen), calling her an “annoying little pissant.”

“It was fine. It was okay. I thought the first scene was so staged, where Brady’s like, in the kitchen. His kid’s being an annoying little pissant,” Reimer said. WEEI has deleted the clip from their site, but it has popped up elsewhere on the internet. You can listen to it here.

Brady confronted the comment while chatting with “Kirk & Callahan” on Monday, January 29. Brady has made weekly appearances on the show for quite some time, but he told Kirk & Callahan that he is reconsidering a return following Reimer’s comment (Reimer has been a part of “Kirk & Callahan” regularly).

“I’ve tried to come on this show for many years and showed you guys a lot of respect … I’ve always tried to come on and do a good job for you guys. It’s very disappointing when you hear that, certainly. My daughter, or any child, they certainly don’t deserve that,” Brady said. “Obviously I’ll evaluate whether I want to come on this show again, so I really don’t have much to say this morning. Maybe I’ll speak with you guys another day,” he added.

WEEI has confirmed that Reimer was “suspended indefinitely” as of Friday, January 26. The station released the following statement on January 29.

Statement from WEEI and Entercom: pic.twitter.com/Gz7zNGrStl

At Super Bowl LII Opening Night, Brady was further questioned about Reimer’s comment and said that he hopes Reimer doesn’t get fired.

“We all have careers and make mistakes. I’d hate for someone to have to change their life over something like that. That was certainly not what he intended. I just thought it was not very appropriate. … Look, I think we all go through our life and sometimes we say things we shouldn’t say or make mistakes, and that happens. I can express it and you move on,” Brady said. He was then told about Reimer’s suspension.

“I didn’t hear too much about it. I didn’t get into it much. I certainly hope the guy is not fired,” Brady responded.

2. He Is Being Slammed on Social Media & People Want Him to Get Fired

Hello @WEEI fans! You were introduced to this beautiful face one year ago today. Blame @KirkAndCallahan. pic.twitter.com/LDtYudMdr3

It’s no surprise that Patriots fans are taking shots at Reimer after his comment about Brady’s daughter. Although he has not released an apology to Brady or Brady’s family, he has responded to a comment about him potentially getting fired.

“I cannot believe you thought you could bully the daughter of a professional athlete who plays in your state…and that professional athlete also happens to be the most popular man in New England, Tom Brady, who does interviews with your workplace. You must not like working,” wrote one Twitter user.

“Lmao, doesn’t sound like you will be standing anywhere near radio after Brady just yanked your livelihood away from you this morning cuz you’re a little bitch that tried to further your career with an intentionally crass hot take that bullied a 5 yr old girl,” wrote another.

3. He’s Openly Gay & Wonders Why There Aren’t Any Openly Gay Athletes in the NFL, MLB, NBA, or NHL

Reimer came out in college after struggling with his sexuality when he was younger. In 2016, he came out to WEEI listeners while on “Kirk & Callahan.” After coming out, Reimer said that it may have helped his career in sports journalism overall.

“The reaction from coworkers and colleagues was fine. I don’t think it’s hurt. In fact, it has probably helped, to be honest with you. In sports radio, it helps me stand out. There’s traditionally a more heterosexual, conservative audience. I come in and shock that audience a bit,” Reimer told Boston Spirit Magazine in a 2017 interview.

In that same interview, the LGBT publication also asked Reimer what “sports-related issue” he was interested in at the time.

“I’m puzzled at the fact that we still have no active, openly gay players in the NFL, MLB, NHL, or NBA. At the corporate level, these organizations seem to do a great job when it comes to LGBT inclusion. But there’s still something missing in the equation in making the locker room a truly open and welcoming space,” Reimer responded.

As far as athletes that Reimer is attracted to, he named Jimmy Garoppolo and Danny Amendola. And while Brady has been appreciated as an attractive man, the quarterback doesn’t do it for Reimer.

4. He Has Been Writing About Sports Since He Was a Kid & His Work Has Been Featured in Forbes & SB Nation

OK, folks. @kirkmin hates my hat. I love it and have received many compliments. What do we think? Vote in the poll below: pic.twitter.com/cD3fMPDBYp

Reimer joined WEEI in October 2016. He has not only written for various shows, but he has been a guest on “Kirk & Callahan” several times.

While most journalists get their starts in college, Reimer was far ahead of the game, getting recognized for his work in the industry when he was just a kid. The the age of 12, Reimer landed himself spots on The Today Show and The Tonight Show because of his talents in sports journalism.

The video below is of Reimer interviewing the host of Baseball Tonight, Karl Ravech, back in 2011. The segment was part of KSPORTS New England, “a monthly sports magazine show for kids by kids.” At the time, Reimer was 19 years old.

Reimer landed an internship at 98.5 The Sports Hub in 2013. According to his LinkedIn page, he worked as an intern for “Felger and Mazz” and “The Baseball Reporters.” He did “screen calls and aided hosts in show preparation.”

From there, Reimer went on to work as a featured columnist at the Boston Herald, all while keeping up with podcasts and other radio gigs. After six months writing for the Herald, Reimer became the co-host of “Big Show Unfiltered.” He also landed himself a steady gig on as an “on-air personality for the Boston Herald’s flagship radio station.”

He has worked for BostInno, Boston Magazine, SB Nation, and Forbes, all of which round out his impressive resume.

Reimer grew up in Massachusetts. Although he doesn’t consider himself an “athlete” by any means, he ran cross country while attending Natick High School.

After graduation, Reimer attended Boston University, where he studied broadcast journalism. He has previously explained why sports broadcasting is the right place for him.

“It’s a fit for my personality. When you’re talking about sports, you can be more bombastic than about more serious topics. But it’s also a springboard to talk about cultural and social issues. That’s what makes someone like Colin Kaepernick such a great story. You can talk about his protest in terms of what it does to his football value, how it relates to police brutality, and whether it bothers you if he doesn’t stand for the National Anthem,” Reimer explained to Boston Spirit Magazine. 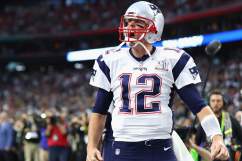 Alex Reimer wrote an article today with WEEI, and said Cam Newton is an incompetent QB, and blamed Cam for 2020! Aren’t those words bigotry.
He has a history of hating on Cam Newton all the while he was a Patriot. Why is he allowed to sow bigotry like that?
Cam did well to win 7-8 games with the worst team in 2020! Edelman only helped in 6 games. They gave Cam a disaster of a team. They gave Mac Jones $180 millions new weapons and rebuild to help him. He didn’t have 8 opt outs as Cam had, either.
Alex Reimer needs to stop being so brutal at Cam!

Why is this disgusting, queer, degenerate, getting publicity? He and his lifestyle are an insult to God.

-1
wpDiscuz
2
0
Would love your thoughts, please comment.x
()
x
| Reply
Alex Reimer is a sports radio personality on WEEI in Boston. He was suspended from the station after making a tasteless comment about Tom Brady's daughter. Here is what you need to know.