As the new driver of the No. 88 Chevrolet Camaro, Alex Bowman is about to gain a lot more fans, but his girlfriend, Emily Boat, has been with him before he took over for Dale Earnhardt Jr. The couple does not talk a lot publicly about their relationship, but does frequently post pictures of their activities on Instagram.

Alex and Emily are a typical couple who enjoy going out to dinner, and playing with their dogs. Emily is used to being around auto racing with a father and brother both involved in the sport. Alex told ESPN that the key to his future success is to have fun on the track.

“There’s also a point that you get so trapped in that world and you think nothing else matters and you have no fun,” Alex told ESPN. “When I go to the race track, I want to have fun.”

Meet the woman who is hoping to make a lot of trips to Victory Lane with Alex.

1. Alex Still Gets Asked For ID When He Takes His Girlfriend to Movies

Alex may be the new face of the No. 88 car, but that does not prevent him from getting carded on date night. Alex spoke with the Arizona Republic about taking Emily to a movie, and having to pull out his license.

“Yeah, we went to the movies,” Alex told the Arizona Republic. “Well, it was an R-rated movie and uh, I got carded.”

Alex is 24, but he still gets asked for ID. This may change as 2018 goes on as Alex becomes more well-known after taking over Earnhardt Jr.’s ride for Hendrick Motorsports. 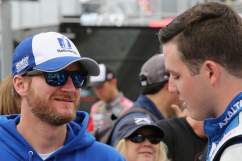 Alex Bowman Is New Driver in No. 88 Car for Dale Earnhardt Jr.

2. The Couple Are Proud Dog Owners

Happy Valentine’s Day to Finns girlfriend. It’s cool sometimes I get to hang out with her too.

Alex often posts pictures of his dog, and is open about their affection for Emily. On Valentine’s Day he referred to Emily as his dog “Finn’s girlfriend.”

“Happy Valentine’s Day to Finns girlfriend. It’s cool sometimes I get to hang out with her too,” Alex posted on Instagram.

On another occasion, Alex bragged about getting to take Emily out without the dogs.

According to ESPN, Alex purchased a home in Mt. Ulla, North Carolina with enough land for his dogs to roam free.

“I like it,” Alex told ESPN. “It’s convenient. I have a little gym in my shop, too, which is nice. I live pretty far out. I like people, but I like having my space, too. I’ve got room for my dogs to run around. We fired off the midget in the middle of the neighborhood and no one said anything.”

Getting the three musketeers to pose for a picture today proved impossible ???‍♂️

So thankful for @emilyboat who makes me a better person and my life a better place!

Pictures of the couple started appearing on social media on October 2017. Alex took to Instagram to tell the world how happy Emily makes him.

“So thankful for @emilyboat who makes me a better person and my life a better place,” Alex posted on Instagram.

Emily returned the favor on Valentine’s Day with her own Instagram caption.

4. Emily’s Father Is the Owner of Billy Boat Exhaust & Her Brother Is Also Involved in Racing

Life with Alex is not Emily’s first introduction to auto racing. Several members of her extended family are or have been involved in sports in some capacity. Her brother, Chad Boat, recently raced at the Chili Bowl Nationals where she and her siblings were there to cheer him on.

It's @cbnationals main event day ? ‼️ ALL previous season @ChadBoat shirts are $10 ‼️& buy a new shirt, get a vintage one for FREE ?? pic.twitter.com/0af7tmmdSG

Her sister, Brooke Boat, is a former cheerleader for the Carolina Panthers, and now works for Taylor Strategy.

There's not very many people I would sit in this cold for, but topcat brooke is one of them ?

Emily’s father, Billy Boat, is also involved in racing as the owner of Billy Boat Exhaust. The company’s website notes Billy has been part of racing for over 25 years.

Performance is what we do and it is who we are. With over 25 years of experience in the racing and exhaust industry, Billy Boat has learned a few things about performance. Whether it is leading the field as the fastest qualifier at the 1998 Indy 500 or leading a team of highly skilled fabricators, performance is measured by more than just horsepower. Performance is delivering beyond expectations.

The couple’s families share a lot of similarities. Alex’s father, Sean Bowman, also has an affinity for cars. According to Motorsport.com, Sean runs a full body shop in Tucson, Arizona. Sean played a big role in his father’s start in auto racing as Tucson.com described him as Sean’s “inexhaustible coach, sponsor, agent, mechanic, financial analyst, father and marketing guru.”

Now, Sean is seeing the rewards of the sacrifices he made for his son. After Alex signed a contract with Hendrick Motorsports to take over the No. 88 ride, he was able to celebrate the accomplishment with his father.

“I was able to share everything with my dad,” Alex told Motorsport.com. “He was at the shop with us. He has a full body shop back home in Tucson and we visited the Axalta Center, which was really cool. That’s his world and I literally couldn’t get him to leave.”