There are few things more iconic in racing that the No. 43 car, and Darrell “Bubba” Wallace is the new face for the car legendary racer Richard Petty made famous. Not only is Bubba taking over an iconic number, Bubba is making history as NASCAR’s first full-time African-American driver since 1971 when Wendell Scott was racing.

“The King” thinks Bubba has the potential not just to succeed, but be the face of NASCAR as he discussed with Bleacher Report.

“And I’m telling you, Bubba can be the next star in our sport,” Richard told Bleacher Report. “He has as much talent off the track in dealing with the media and sponsors as he does on it. He’s going to be a special one.”

Despite racing for one of the best drivers of all-time, Bubba told the Charlotte Observer he does not feel a lot of pressure to perform.

“Richard Petty told me before climbing in [this year], no need to be a hero,” Bubba told the Charlotte Observer. “No need to overstep anything that you’re doing. I’m here for a reason, and I’m here because I’ve proved my point, so just go out there and do what you do.”

Learn more about Bubba’s family, and his path to NASCAR.


1. Bubba Is Making History as the 1st African-American NASCAR Driver to Have a Full-Time Ride Since 1971

Bubba is originally from Mobile, Alabama, but moved to Concord, North Carolina when he was two. According to Kentucky.com, Darrell Sr. is the owner of an industrial cleaning company, while his mother is a social worker who ran track at the University of Tennessee. Given Bubba is doing something that has not been done in decades, his race comes up a lot in interviews, but Darrell has tried to embrace being someone who could pave the way for more diversity on the track.

Bubba credits his father for introducing him to racing. According to Kentucky.com, Darrell Sr. purchased a Harley-Davidson motorcycle when his son was nine, and the seller invited them to a go-kart race. It was Bubba’s introduction to racing.

“We went,” Bubba told Kentucky.com. “We were sitting there watching, and I still remember this, my Dad turns to me and said ‘Is this something you think you would like to try?'” 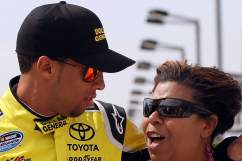 2. His Sister, Brittany, Called Him Bubba When She Was Younger & The Nickname Stuck

To many NASCAR fans, Darrell is known simply as Bubba. Little did Bubba know that his sister Brittany’s nickname for him when she was five would stick.

“It stuck,” Bubba told Kentucky.com. “I kind of like [having a nickname]. At the racetrack, I don’t get confused with my Dad. People just say ‘Hey, Bubba.'”

According to Blavity.com, their parents are separated, but it is something that helped their athletic careers as Brittany focused on playing basketball. Desiree was with Brittany in gyms, while Darrell Sr. spent the weekends with their son at race tracks.

“By the time Bub got into racing when he was 9-years-old, my daughter was already established in basketball with AAU,” Desiree told Blavity.com. “While they were on the racetrack, she and I were traveling all over the United States with basketball.”

3. Bubba’s Girlfriend Is Amanda Carter & Admits She Is “Only Here to Embarrass Bubba”

Made it! Found this fool too pic.twitter.com/sAhFed7iRZ

Bubba’s girlfriend, Amanda Carter, appears to have a good sense of humor, even if it is at Bubba’s expense. Her Twitter bio simply reads: “Only here to embarrass @bubbawallace.”

Amanda’s Twitter feed gives fans an inside look at how the couple spends their time, including decorating their tree in Santa pajamas.

Quick poll: should I ask @BubbaWallace to put the finishing touches on this year’s tree in last year’s santa pjs? pic.twitter.com/UUtzn1fGkm

There’s also this travel tip from Amanda when trying to plan flights with Bubba. “Booking flights for @BubbaWallace isn’t easy… he doesn’t go by his first or middle name, don’t think TSA will let “bubba” board the plane,” Amanda tweeted.

Aside from her strong social media game, Amanda is a staple at the track. According to Auto Week, her first time seeing Bubba win in person came in October 2017 when she watched her boyfriend win a NASCAR Truck Series race at Michigan International Speedway.

“This is so incredible. It is so awesome,” Amanda told Auto Week after the victory.

4. Bubba Ignores the Presence of Confederate Flags Noting the Only Ones He Sees Are “Green, White & Checkered”

In an interview with USA Today, Bubba was asked about the presence of confederate flags at NASCAR events, and he noted it is something he ignores.

“The only flags that I see [are] green, white, the checkered, sometimes the black flag, which is never good, and sometimes the yellow flag,” Bubba told USA Today.

While Bubba wants to be identified for his abilities on the track, he noted to the USA Today that he tries not to get frustrated when his race is constantly mentioned. Bubba explained why he told fans to “embrace” his identity as “the black driver” in an earlier tweet.

“[For the media], their headline is ‘black driver’, ‘African-American driver’, and fans are getting tired of it. So I was letting them know – I wouldn’t say I’m tired of it, but I’ve accepted it.

I know that every article that you pull up is gonna start with that. Embrace it, [and] carry on about your day. No need to waste 20 seconds of your life where you’re responding ‘Oh, this is annoying. He doesn’t need to be labeled.’ I’m gonna be labeled, it’s gonna happen, it’s all part of it. So just enjoy it, sit back, embrace it, enjoy it.

5. Dale Earnhardt Jr. Let Bubba Use His Private Plane to See His Grandmother Before She Died

At first, Bubba’s mother was not sure about her son’s auto racing path, but now could not be prouder. The family grew up watching Dale Earnhardt Sr., which would come full circle when Bubba’s grandmother was going through her final days.

“It’s not that I didn’t like the sport. Being in an interracial marriage all those years, I grew up watching NASCAR,” Desiree told Blavity.com. “Dale Earnhardt Sr., was our favorite driver before he passed, and my brother-in-law was a driver in Nashville, Tennessee so I went to a couple of races and I knew a little bit about it. But, I wasn’t sure if that was what I wanted for Bubba…At the end of the day, Bub was committed to it, so here we are.”

Dale Earnhardt Jr. offered up his plane and driver to Bubba to see his grandmother, Granny Jan, one final time before she died.

“Thank you @DaleJr and your pilot as well as @2Spotter for allowing me to get one last visit with her in Knoxville. True friend Jr, thanks,” Bubba tweeted.

Bubba also tweeted a lengthy post about his grandmother after she passed away.

Just think about the endless amounts of cards,bingo and wigs you get to enjoy now. Love you granny! ♠️♣️♦️♥️ pic.twitter.com/0DrmTRa5To