Apolo Ohno is a former competitive skater. He competed for Team USA in short track speed skating in the 2002, 2006, and 2010 Olympic Games, tallying a total of eight medals (two gold, two silver and four bronze). Ohno medaled in the 500, 1000 and 1,500 meter individual competitions and the 5000 meter relay. He’s also racked up a total of 21 medals in various events at the World Championships.

This year, Ohno will serve as a media correspondent in South Korea for the 2018 Olympic Games in PyeongChang.

Ohno is dating actress/model Bianca Stam. The two have traveled the world together over the past year, and adopted a dog together last Christmas. Stam also owns her own restaurant.

While it’s unclear exactly how long Stam and Ohno have been dating, the two have made their relationship Instagram official. They have been sharing pictures of each other for over a year now, though Ohno tends to share pics more frequently than Stam does.

“Your beauty is beyond anything I’ve ever experienced. My flaws and weakness have been backed by your incredible strength. The unconditional love that you give to me – drives me to be a better man. You do all of the right things, all of the time. I will give my all!!! 100 percent. Thank you for being you. One in a trillion,” Ohno captioned an Instagram photo back in August.

In November, the couple celebrated Stam’s 27th birthday together. She posted a photo of a large bouquet of flowers that Ohno got her. She was also gifted a green Hermes bag.

“‘After women, flowers are the most lovely thing God has given the world.’ And boy do I wanna thank God for my birthday in 2017. @apoloohno you’ve spoilt me outrageously (it’s too much) and words can’t express how I feel… but most importantly I want to thank you for being by my side as the best friend I’ve ever had. Thank you for everything that you do and all the new experiences we’ve shared. All the new memories we’ve decided to make, thankful for the best new start to a new year of more fruitful blessings,” Stam captioned an Instagram post.

She also included a short video of her and Ohno in the back of car in which you can hear her say, “so handsome,” whilst filming her beau.

Stam and Ohno have traveled the globe and seem to enjoy exploring new places together. It is unknown if Stam will be with Ohno in South Korea, but fans will be keeping their eyes peeled.

2. She Is an Actress & Model Who Speaks 5 Different Languages & Has Produced a Documentary

#throwback to this day on set. #sony #musicvideo

Stam may not look super familiar, but she has done some acting and modeling over the years.

Most recently, Stam shot a campaign for Sora Beauty, a company that specializes in everything hair.

“First shoot of 2018 for Sorabliss Hair. Your style and aesthetic is everything,” she wrote on Instagram in January.

In 2017, she starred in a film called Chasing the Dragon, which was released in Hong Kong. The film, written by Jing Wong, is about “an illegal immigrant from Mainland China sneaks into corrupt British-colonized Hong Kong in 1963, transforming himself into a ruthless and emerging drug lord,” according to the Internet Movie Database (IMDb).  Donnie Yen, Andy Lau, and Philip Keung all co-starred in the movie.

Also in 2017, Stam produced a 14-minute documentary short called The Beauty Machine, which was also released in Hong Kong. In addition to producing the short, Stam starred in it as herself.

The Beauty Machine is “an interview with working women in the media and entertainment industry in Asia, tackling the topics of beauty, expression, and how being in media has impacted their lives,” according to IMDb.

3. She Owns an Italian Restaurant in Chicago Called Bar Roma

Stam also has a love of food, and so she opened her very own restaurant.

Bar Roma is located on North Clark Street in Chicago. The Italian eatery opened in 2016, just before the holidays. The menu features some traditional Italian dishes, from pasta made in-house to antipasti and, its specialty, meatballs.

“Specializing in meatballs, house made pasta and wood-fired dishes, Bar Roma highlights the cuisine of Rome, Italy and its surrounding area. Our spacious bar welcomes guests for creative, Italian-focused craft cocktails and notable wines curated by local industry innovators,” reads a description on the eatery’s website.

Bar Roma has received excellent reviews on both Google and Yelp!

“It takes more than exquisite cooking to make a memorable meal. We at Bar Roma believe an intimate atmosphere in the right location, personal and attentive service and great company are what separates a delicious dinner from an unforgettable experience,” reads the eatery’s motto.

You can watch Ramos on Chicago’s local You & Me This Morning from October 2016 below.

4. She & Ohno Have a Puppy Named Sesame Mochi Ohno

Hi Guys! My name is Sesame Mochi Ohno and I’m a … well.. I don’t really know but I’m very mixed like my parents so that’s cool! Maybe a schnauzer chihuahua mix because I’m so tiny! I can’t wait to share my journey w you ?? #adoptdontshop #babygirl #imarescue #manyarecutelikeme

Just after Christmas, Stam shared some exciting news with her social media followers: She and Ohno adopted a puppy together. The duo have simply fallen in love with their tiny new addition, Sesame Mochi Ohno.

Little Sesame has made several appearances on Stam and Ohno’s Instagram pages over the past couple of months.

One of her favorite things to do is “ride around in her mama’s car,” according to Stam.

“She’s easily the best tempered dog I’ve ever met. She walks up to every single person with a heart full of love and respect, loves kids and men and thinks she’s a big dog. (She’s 3.3 pounds, lol). Never scared of anyone or any dog. I don’t know how I got so lucky, she’s a rescue dog yet it’s like she was bred for perfection. The car wash owner today said to me “dogs are a reflection of their owner” and it just made my heart smile,” Stam posted as an Instagram caption at the beginning of February.

From 2004 through 2009, Ohno dated fellow ice skater Allison Baver. The Reading, Pennsylvania, native competed in the 2002 and the 2006 Olympic Games. The short track speedskater retired in December 2017.

In 2014, the Daily Mail posted photos of Ohno on vacation in Hawaii with a “mystery girl” that the site referred to as “Ohno’s girlfriend.”

“While the identity of Apolo’s lady love remains a mystery, it’s clear the pair have built up quite the easy, natural rapport during their relationship. Both seemed perfectly comfortable in the other’s presence, clearly relishing spending some one-on-one time together in the beautiful, exotic locale,” the site reported at the time.

He was also linked to Dancing With the Stars‘ Karina Smirnoff and Julianne Hough (with whom he won the Mirror Ball Trophy with in Season 4), but nothing ever came out of those rumors. 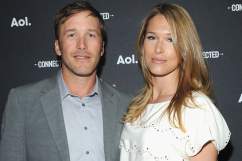