Morgan Beck is the wife of former Olympic skier, Bode Miller. She and Miller tied the knot in October 2012, just five months after they started dating.

Beck is the daughter of Ed and Cindy Beck. She has one sister, Erin Margolin, and a brother named Garrett.

Beck, 30, and Miller are parents to a son named Nash; the couple’s other child, a daughter named Emeline Grier, passed away. In June 2018, news came out that Emeline had drowned. Beck is also the stepmother of Miller’s two other children, Dacey and Samuel (whom she and Miller often refer to as “Nate”).

Happy Thanksgiving from the Miller’s. Lots to be thankful for this year. And really enjoying my first Thanksgiving with my family on the east coast in 20 years.

On June 11, 2018, it was announced that Emeline died, having drowned in a neighbor’s pool during a party.

Beck is also a stepmother to Miller’s two other children. As you can see in the photo above, the family of six got to spend Thanksgiving together this past year.

Miller has a daughter named Neesyn Dace with his ex-girlfriend, Chanel Johnson. The child, who goes by her middle name (she’s often called “Dacey”), lives in Escondido, California, with her mother. She was born on February 19, 2008, at Palomar Medical Center.

Miller didn’t confirm that he had a daughter until a year after she was born.

“The mother is a good friend of mine who I was seeing a while ago. We are no longer together. We were kind of already doing our own thing when she found out she was pregnant. We are just really good friends trying to be good parents. I obviously would have liked it to be an ideal situation where everything is planned and perfect, but it seems like a lot of stuff doesn’t work out that way. I’m happy the way it is,” Miller blogged in 2009, according to the San Diego Tribune.

Tearing up the dance floor with my beautiful date tonight #fatherdaughterdance

He and his now-ex, Sara McKenna, welcomed a baby boy they named Samuel Bode Miller McKenna in 2013. After Samuel was born, a bitter custody battle broke out between his parents. Things were so bad, in fact, that the former couple couldn’t even decide on a name. To this day, the boy’s mom calls him “Sam,” while Miller and Beck call him “Nate” (after Miller’s late brother, Nathaniel, who died of a seizure at the age of 29 in 2013).

The custody case was settled in November 2015.

“Neither of us got exactly what we wanted, but Sam got what he needed and that’s what’s most important to me,” McKenna told the New York Post at the time.

Below is a photo of Miller and his son, Samuel, whom he calls “Nate.”

“It was awful. Morgan and I hadn’t planned on getting pregnant, but we were excited. In hindsight, now, we can see what an incredible challenge having two babies would have been. I don’t believe in fate- that everything happens for a reason- but Morgan does,” Miller told Us Weekly at the time.

2. She Posed in a Nude Photo After Welcoming the Couple’s Daughter in 2016

After giving birth to her daughter, Emeline, Beck posed nude with her husband and he posted the picture on social media. The photo was used as a public birth announcement.

Baby Emeline was welcomed into the world on Saturday, November 5, 2016. Beck went through the labor and delivery process at home. Beck also gave birth to the couple’s son, Nash, at their home. He was born in May 2015 and weighed 7 pounds, 13 ounces.

Morgan also took to Instagram to announce the arrival of their baby girl. “Our baby girl made her way earthside this morning 7 lbs 4 oz 20.5 #grateful for another successful home birth,” she captioned a closeup shot of the couple’s new daughter.

3. She Played Professional Volleyball & Has Modeled

Beck first started playing volleyball as a teenager. She attended the University of California, Berkeley, where she played on the school’s volleyball team. She played outside hitter and middle hitter. While in college, she was named to the PAC-10 All-Freshman team.

After college, Beck went on to play volleyball on a professional level. She has played for AVP Pro, USA Volleyball, and AVP Young Guns. She became part of Team USA in January 2008.

The girls are on to Saturday here in Cinci @avpbeach ! @morganebeck @jessgysin I'm holding down the cheering section for you @jimmyclausen

“Morgan Beck is hotter than most models and is a better athlete than most men. This preposterously attractive standout volleyball player is looking to win her first Olympic medal this year in London. And if she somehow fails to do so, we’ll be waiting to cook her a romantic meal and buy her a nice bottle of wine to cheer her up,” read her Complex Magazine bio.

4. She’s Very Close to Her Dad

Beck is very close to her dad, Ed, who is an army veteran. In fact, she named her first born after him (Edward Nash).

In her Team USA bio, Beck was asked who the person she most admires is. Her response was simple: Her dad.

She often takes to social media to post pictures of her father.

“Happy Father’s Day to my main man, the big cheese, el cap-I-tain, BMOC….aka DAD. Not only are you the best dad in the world, but you’ve quickly earned the title of best grandpa in the world too! I couldn’t imagine my life without you. I love you dad,” she captioned an Instagram photo of her parents with the four Miller children on Father’s Day last year.

Until next year, Derby!

In 2012, Beck took to social media to share a gruesome injury that she endured. Miller had been hitting golf balls and a line drive managed to nail Beck in the face.

Beck discussed the accident on social media, saying that she received 50 stitches after the ball — which was going approximately 160 miles per hour — hit her in the face, just above her left eye.

“I’m not feeling so hot. Line drive to the face today with a golf ball from my darling husband. I still love him but #ouch,” Beck captioned a gnarly photo on Instagram.

A few days later, Beck posted the following photo, showing her husband continuing to work on his golf swing with his injured wife sitting behind him. Check out her cheeky caption to the photo below.

What's wrong with this picture? I'm laying on the sofa directly behind him. I guess no lesson learned? ⛳ pic.twitter.com/1Vm19ZYK 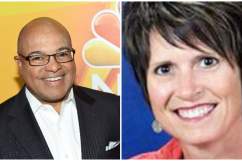