Rob Gronkowski and his New England Patriots teammates are set to take on the Philadelphia Eagles in Super Bowl LII on Sunday, February 4, with kickoff scheduled for 6:30 p.m. Eastern.

According to Spotrac, Gronkowksi is currently under a six-year deal worth $54 million. The contract carried an $8 million signing bonus and includes $12.9 million in guaranteed money. In 2020, Gronkowski will become an unrestricted free agent; after Super Bowl LII, he’s due for an $8 million base salary.

Despite being signed to the most lucrative contract for his position in the NFL, Spotrac details that Gronkowski earned only the fourth-highest average salary among tight ends for 2017, trailing the Seattle Seahawks’ Jimmy Graham, the Kansas City Chiefs’ Travis Kelce, and the Washington Redskins’ Jordan Reed. With Graham scheduled to become an unrestricted free agent in 2018, Gronkowski’s contract will move him into third among actively-signed tight ends.

As ESPN reported last May, the Patriots restructured Gronkowski’s contract for the 2017 season, loading it with $5.5 million worth of performance incentives, offering him the chance to reach $10.75 million.

— First tier, which gets Gronkowski $10.75 million with either 90 percent play time, 80 catches, 1,200 receiving yards or an All-Pro recognition (which he’s made four times).

ESPN noted that Gronkowski, at that point, had not played a 16-game season since his second year, in 2011, having sat out 30 of a potential 92 games (32 percent), including playoffs, over the past five seasons.

Gronkowski reached 69 catches and 1,084 receiving yards through the regular season, falling short of the first-tier stat goals of his restructured contract. However, According to CBS Sports, Gronkowski was named to the NFL All-Pro team by the Associated Press, earning him the top-tier payout for 2017 and an extra $2 million over the second-tier incentives.

Regardless of how much money Gronkowski actually earns, it’s his lifestyle that indicates that he’ll be fairly well off after his playing career is over.

In 2015, Business Insider reported that Gronkowksi had yet to spend any of the money he’d made playing football professionally. The outlet reported that the popular tight end had earned more than $16 million over the course of five seasons playing for New England and quoted an excerpt from his then-upcoming autobiography, It’s Good to be Gronk, to explain how he pays his bills.

“To this day, I still haven’t touched one dime of my signing bonus or NFL contract money. I live off my marketing money and haven’t blown it on any big-money expensive cars, expensive jewelry or tattoos and still wear my favorite pair of jeans from high school,” the excerpt read. 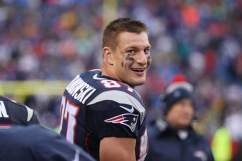