At today’s big game where his former team, the New England Patriots, will take the field, three-time All-Pro and two-time Super Bowl champion Rodney Harrison will be at the pre-game show giving his expert opinion, based on his many years of experience. From 1994 to 2002, he played with the San Diego Chargers and with the Patriots from 2003 to 2008.

Although the ex-safety was once considered one of the dirtiest players in the NFL, off the field, Harrison is a devoted family man. The Illinois native is married to Erika, his college sweetheart, and the couple has four children.

Here’s what you need to know about the woman- and proud football wife- who stole the athlete’s heart.

Happy Birthday @Rodney_Harrison ! I’m proud of the man U have become. I feel blessed to have U in my life as a great husband, father, friend, and soulmate. I couldn’t imagine this life without U! Njoy Ur Bday gift!! ❤️ pic.twitter.com/9rSVC223IE

The NFL produced a series called A Football Life, with one 2016 episode chronicling Rodney’s career and personal life. At the 8:17 mark, Erika is interviewed and details their first encounter.

“Oh gosh, the first time I met Rodney, it was at Western Illinois University, on campus. And he gave me the lamest line ever,” she explains in the video below.

The camera switches to Rodney and he completes that part of the story, explaining the line was, “What’s up, baby?” “And she looks at me, rolls eyes and keeps walking,” he continues.

Then he goes on to explain that they happened to be enrolled in the same class and one day, he informed her that class was canceled, which it wasn’t. He got a big laugh, when the professor asked for homework from the previous lecture. “After that, we just started talking and connected,” Rodney explained.

Erika ended the story of the beginning of their courtship with this sentiment:

He had like a reputation for being this bad boy on campus, but he showed me something totally different over time when we were at school. So he charmed his way into my heart.

2. Rodney Recently Compared The Strife in Their Longterm Relationship to the Patriots’ Tension

After retiring, Rodney took a job with NBC Football Night in America. He’s definitely earned his commentator status based on the fact that when he retired, Coach Bill Belichick told Boston.com, “Rodney Harrison is one of the best players I have ever coached. In the biggest games, in any situation and on a weekly basis, his production was phenomenal.”

In January, ESPN published an article on Belichick and a possible gloomy future for the Patriots’ hierarchy, titled, “For Kraft, Brady and Belichick, is this the beginning of the end?”

Harrison recently weighed on the controversy surrounding his former team and used his longterm relationship with his wife as a comparison. In an interview with Patriots.com last month, he likened his marriage to Erika to the tension among the team, stating:

They should have written a story about me and my wife, because we have strife sometimes. Sometimes she won’t talk to me for a couple days. It happens when you’re in a long-term relationship. That’s a relationship. That’s a partnership. The thing that I see with those guys is they respect one another. And Belichick knows how to push Tom Brady more so than anybody. It’s a healthy, respectful relationship. Do I [always] agree with my wife? No, but it happens and you learn how to work through it.

However, the pair seems to have a solid and supportive marriage. In fact, on her Twitter profile, Erika describes herself as a “football wife, mommmy and lover of life.”

3. She Has 4 Children With Rodney & Says He’s ‘Totally’ Different At Home

Happy Father's Day to the most amazing Dad! I'm proud of the man, husband, and dad you've become! @Rodney_Harrison pic.twitter.com/0d5ufvLuEO

“He’s totally not the person that he is on the field,” Erika told Patriots.com when they asked what Rodney is like at home. “Very sensitive guy, that’s what I fell in love with.” she continued, smiling.

They had their first child, son Christian, in February of 2004, and Rodney gushed to Patriots.com that it was the best thing that every happened to him, with winning the Super Bowl coming in second.

The couple also share son Rodney, Jr. and two daughters, Mikala and Sydney. The family lives in Atlanta, Georgia, and in a video interview done by Maxim, audiences are taken into the Harrison’s home. “Rodney did most of the decorating. He has wonderful taste,” Erika gushes.

4. She Earned an MBA

Rodney played football at Western Illinois University from 1991 to 1993, and Erika was there from ’92 to ’93, so it is fortunate that they had a year of overlap, which allowed them to meet on campus.

According to her LinkedIn page, she studied pharmacy for a year at Western Illinois, and then completed her bachelor’s in health care at the University of Phoenix, where she also earned an MBA.

Her professional profile also notes that she is the vice president of Harrison Sports, Inc, which seems to be in collaboration with her husband’s endeavors.

In May of 2012, Rodney’s teammate Junior Seau, died by suicide, which was reportedly due to chronic traumatic encephalopathy, a neurodegenerative disease caused by the head-to-head collisions he suffered from over from playing in the NFL. It can result in dementia, memory loss and depression.

When he learned of the loss of his friend, Rodney looked to his wife for support. “I was at home when I heard the news, and I just dropped the phone and I turned to my wife and told her, and we just cried, because she understood how important Junior was to me,” he said on A Football Life.

“Well the conversation really started at Junior’s funeral. I said, ‘We need to talk more openly about it.’ And he needs to tell me how he feels all the time,” she continued. 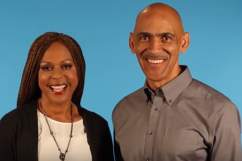