Getty James Harden is the favorite to win the 2018 NBA MVP.

Just like last year, fans will have to wait until after the NBA playoffs are over to find out who won the NBA MVP. The MVP, along with the other major awards, will be announced as part of the NBA Awards 2018 on Monday, June 25 at 9 p.m. Eastern on TNT. According to OddsShark, Jame Harden is the favorite to win the award after losing in a close race last season to Russell Westbrook.

LeBron James, Anthony Davis and Giannis Antetokounmpo are some of the other contenders for the award. Harden was a strong candidate for the 2017 MVP, and his numbers this year are just as strong. Harden’s averaged 30.4 points, up from 29.1 during last season. His three-point percentage is up to 36.7 percent from 34.7 percent last season. Harden’s assists (8.8 per game) and rebounds (5.4) are down from a season ago. Harden’s plus/minus ratings saw an uptick to 7.3 up from 5.2 last season.

ESPN is projecting Harden will win the MVP race by a wide margin.

The ESPN Forecast panel, which relies on the “wisdom of the crowd,” decisively chose Harden as the likely winner. This makes sense, because Harden both excels in traditional box score categories (the league leader in points per game with 31.0, and third in assists with 8.7) and leads all players in real plus-minus wins (an estimate of the number of wins each player has contributed to his team), as well as player efficiency rating…

Forecast voters predict a nip-and-tuck contest for second place, as LeBron James and Anthony Davis have separated themselves from the rest of the pack. The Cavs — at least offensively, which is how the award is generally won — have looked unstoppable, with LeBron posting a line of 31.4 points, 10.2 rebounds and 9.9 assists in the month of March. Davis’ dominance has made the New Orleans Pelicans a feel-good story as they fend off a scrum of quality Western Conference teams for what increasingly appears to be a likely postseason berth.

Harden may be the favorite, but James has made the case for his own candidacy. James is averaging 27.7 points, 8.7 rebounds and 9.2 assists this season. However, James’ plus/minus rating of 1.2 is the worst it has been since his rookie year.

“I would vote for me,” James told the USA Today. “The body of work, how I’m doing it, what’s been happening with our team all year long, how we’ve got so many injuries and things of that nature, guys in and out, to be able to still keep this thing afloat, I definitely would vote me.”

Rockets GM Daryl Morey spoke with SB Nation about the jump Harden has made this year.

That really comes down to how teams guard us. We always knew that he could score in isolation. He was always great at that. But what’s given him another leap, is that because of the way teams are guarding us, he’s getting players on him that have a tough time guarding him.

Obviously, I think he’s amazing, and statistically the best isolation scorer ever. What’s been a big factor in his league is just what Coach D’Antoni set up, how teams are guarding us with switching and him getting on guys who are a little more slow-footed, things like that. That’s where the leaps come from. 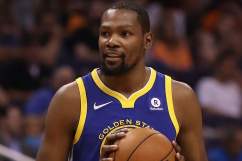 Read More
Basketball, NBA
James Harden, LeBron James and Anthony Davis are the favorites to win the 2018 NBA MVP award. Find out when the NBA MVP voting results will be announced.