Getty The Warriors will be the No. 2 seed in the West when the 2018 NBA playoffs begin.

The 2018 NBA Playoff bracket has been set, and here’s a look at all the matchups.

The 2018 #NBAPlayoffs are set! pic.twitter.com/e2efX7wJkk

Heading into the final night of action, the entire Eastern Conference playoff teams have been locked in with the exact order yet to be determined. The Toronto Raptors will be the No. 1 seed, while the Boston Celtics are the No. 2 seed.

In the Western Conference, the Houston Rockets are the No. 1 seed, and will have home court advantage as long as they are in the playoffs. The Golden State Warriors are the No. 2 seed. The rest of the seeding will be determined tonight. Only one spot remains up for grabs as the Minnesota Timberwolves will take on the Denver Nuggets for the No. 8 seed in the West.

Below are the current playoff matchups along with what we know about the NBA playoff TV schedule.

The Eastern Conference playoff bracket is set. #HeatNation will be taking on #TheProcess in the first round! #HeatCulture #NBA pic.twitter.com/xzx9p2oglH

No. 1 Toronto Raptors vs. No. 8 Washington Wizards
No. 2 Boston Celtics vs. No. 7 Milwaukee Bucks
No. 3 Philadelphia Sixers vs. No. 6 Miami Heat
No. 4 Cleveland Cavaliers vs. No. 5 Indiana Pacers

The NBA Playoffs are locked in. pic.twitter.com/vXsJA3vIAD

The official schedule will be released Wednesday night by the NBA. The following dates and times come courtesy of Sports Media Watch. All times listed are in Eastern. Games 5-7 on the schedule are if necessary. 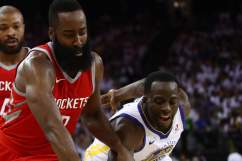