Patrick Reed’s mom, Jeannette Reed, shared a throwback photo of her son on Sunday morning, wishing him well, ahead of the final day of the Masters Tournament. After sharing the throwback snap, she made it her profile picture.

The photo shows a young Patrick, maybe about 3 or 4 years old, holding a golf club and dressed in his very best golf outfit. The photo was part of a well-wish, sent by Jeanette.

“Let’s do this Baby! GO PATRICK!” Jeannette captioned the shot.

Reed is estranged from his parents and doesn’t speak to his family. Details surrounding the family feud are sparse, but their personal lives have been in the news from time to time, thanks to posts on social media.

Things seemed to come to a head back in 2014, when Reed’s parents, Jeanette and Bill, and his sister, Hannah, were kicked out of the U.S. Open.

“A friend of Bill and Jeannette’s had extra tickets to the 2014 U.S. Open, so with some trepidation, they went to Pinehurst No. 2 and followed Patrick throughout the second round. Justine was also in the gallery, but no words were exchanged. Walking up the 18th hole, Bill, Jeannette and Hannah were surrounded by police officers. They ultimately were escorted off the grounds and had their tournament badges confiscated by a USGA official who, according to Jeannette, said he was acting on Justine’s wishes,” according to Golf.

A Facebook post by Reed’s wife, Justine, made headlines in 2016. Justine accused Reed’s parents of verbal and physical abuse.

“They are sick people and need help. Time will tell all. And people are starting to wake-up and realize what kind of people his parents really are. You all should pick up the book: Breaking the Bonds of Adult Child Abuse. Yes, there are actual books on people like this, I am an RN and they are textbook cases,” the post read, in part.

“He had an AMAZING life. My parents gave up EVERYTHING for his dream of becoming a golfer. How can you win events and not thank your parents? They are the reason you even have the best possible chance of achieving your dream. There was NEVER EVER any abuse mentally or physically, abuse of alcohol, or fist fights in the parking lot because he had a bad round,” her post read, in part.

Despite not having a good relationship with her son, Jeannette has been posting about him on social media, wishing him nothing but the best.

“My boy…the way I remember him, very fondly, now he’s in the lead of the Masters, someone pinch me! My Dad’s in heaven having a Manhattan getting ready to enjoy an afternoon of watching his Grandson play golf…GO PATTY,” Jeannette wrote on Facebook on Saturday, April 7.

Jeannette hasn’t posted to Facebook since her son won the Masters Tournament. Several of her Facebook friends have left her congratulatory messages, most in the comments of the throwback photo she shared earlier in the day.

“Thinking of you and Hannah Jordan Reed!! So bittersweet,” one Facebook user commented.

“ Congrats Mom….You have a great soul….Maybe he will see and do what’s right now,” added another. 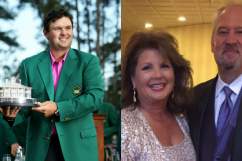