Colombia is hoping they can replicate their magic from 2014 in the 2018 World Cup. James Rodriguez is back on the squad, but enters the tournament battling a bit of a calf injury. After qualifying for the first time since 1998, Colombia made the quarterfinals in the 2014 World Cup, and were one of the surprises of the tournament.

Colombia finds themselves in a very winnable Group H with Poland, Senegal and Japan. The only thing that could seem to derail their chances would be if Rodriguez’s injury lingers. If you believe in Colombia’s squad, they are a nice dark horse to win the World Cup with 40 to 1 odds. They are a slight favorite to win Group H at +130.

ESPN’s Tito Pucceti notes Colombia is not running away from high expectations.

Because of the level of play shown by their footballers in Europe, Colombia should have as an objective to play five games in Russia 2018 just as they did in Brazil 2014. James Rodriguez, Radamel Falcao, Juan Guillermo Cuadrado and Davinson Sánchez are at their best and allow all Colombians to dream of another historical performance.

Heading into the World Cup, Colombia picked up wins against France and China, but lost to South Korea and Paraguay. Colombia also had draws against Australia and Peru. It will be interesting to see if Colombia can replicate their 2014 success as they transition from an underdog to the favorite to win their group. Manager Jose Pekerman believes his players will have to take the next step forward for Colombia to make a deep run.

“Now things are different, it is true,” Pekerman explained to Kyodo News. “We have changed over time the players who now have new functions, who move differently, who are able to adapt to their teammates. So, I think our team is much richer and stronger.”

Colombia’s path to the World Cup was not easy with the number of talented South American teams Colombia was competing against. OddsShark detailed how Colombia qualified for the 2018 World Cup.

CONMEBOL is one of the world’s most difficult regions to advance from in World Cup qualification. With giants like Brazil, Argentina and Uruguay combined with quality teams like Chile, Peru and Ecuador vying for spots in Russia, Colombia’s path was always going to be wrought with challenges.

The last matchday of a tumultuous qualifying campaign saw the Colombians leading Peru 1-0 after a Rodriguez goal in the 55th minute. A full three points would have seen them leapfrog Argentina in the standings and solidify automatic qualification.

An own goal from keeper David Ospina in the 77th brought Peru level and saw the points split. Near disaster for the Colombians.

This left Colombia’s fate in the hands of the already qualified Brazilians, who needed to beat Chile to push James and crew through. Luckily, Brazil delivered a 3-0 smashing in São Paulo that night, putting an exclamation point on their dominance in the CONMEBOL group and punching Colombia’s ticket to Russia.

Here’s a look at Colombia’s roster courtesy of Fox Sports. 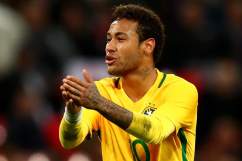