A soccer game, World Cup or otherwise, lasts 90 minutes not counting stoppage time. Unlike most American sports, soccer has a running clock, even when an injured player is being attended to, the clock is still going. World cup matches have two 45-minute halves.

After each 45 minute period, the match goes into stoppage time where time is added based on the amount of time where play was suspended. There is no set amount of time for stoppage time, but it is usually between 1-5 minutes for each half. Halftime lasts about 15 minutes, so fans should account for about two hours from start to finish for a World Cup soccer game. This is for matches in the group stage. Soccer critics often cite the lack of scoring as reason for lackluster excitement, but soccer is pretty fast-paced when considering its total length when compared to other sports.

Once the World Cup hits the Round of 16, there can be extra time which is similar to overtime in other sports. If a game is tied after 90 minutes plus stoppage time, the match heads into extra time which is two 15 minute halves. There is no golden goal where the game ends once a goal is scored. After the two extra time halves have been concluded, the game will go into penalty kicks if a team does not have the lead. For penalty kicks, each team initially gets five attempts. The team with the most goals scored after five attempts wins, and the penalty kicks go into sudden death if there is no leader after the first five attempts

Here’s how FIFA outlined the length of World Cup games in its handbook.

1. All matches shall be played in accordance with the Laws of the Game in force
at the time of the competition and as laid down by the International Football
Association Board. In the case of any discrepancy in the interpretation of the
Laws of the Game, the English version shall be authoritative.
2. Each match shall last 90 minutes, comprising two periods of 45 minutes, with a
half-time interval of 15 minutes.
3. If, in accordance with the provisions of these Regulations, extra time is to be
played as the result of a draw at the end of normal playing time, it shall always
consist of two periods of 15 minutes each, with an interval of fi ve minutes at the
end of normal playing time, but not between the two periods of extra time.
4. If the score is still level after extra time, penalty kicks shall be taken to
determine the winner in accordance with the procedure described in the Laws
of the Game.

If a match goes into extra time, the actual length of the game can be pushed to three hours or more. The World Cup format is interesting in that games end after 90 minutes in the group stage, even if there is a tie. Ties are allowed because the group standings are based on a points system with tiebreakers. Once the World Cup reaches the Round of 16, it turns into a traditional single-elimination tournament. This is when extra time and penalty kicks comes into play. 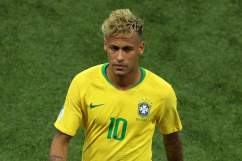 Read More
Soccer, World Cup 2018
How long is a World Cup soccer game? We explore the potential outcomes that could impact a soccer match's length in both the group stage and Round of 16.