Klay Thompson comes from a family of athletes. Klay’s dad, Mychal Thompson, is originally from Nassau, Bahamas, and ended up moving to Miami as a kid. Klay’s mom, Julie Thompson, grew up in the Pacific Northwest just outside of Portland. Mychal had a long career as an NBA big man, while Julie was a top college volleyball player.

Klay is not the only member of the family that understands the life of a pro athlete. Klay’s younger brother, Trayce Thompson, is an outfielder for the Chicago White Sox, and has played for multiple MLB teams. Their older brother, Mychel Thompson, played 6 seasons in the NBA G-League (formerly D-League). Mychel is not sure if their parents’ plan was to create athletes, but it worked out that way.

“I guess when my dad met my mom and they were dating, he did say, ‘If we have kids, they probably will be professional athletes,’ because my mom was really athletic, too,” Mychel explained to Bleacher Report. “My mom said before we were born she would stay up all night trying to beat my dad in pingpong and pool, because my dad was good, I guess, when he was younger, so my mom would always play until she could beat him. But it was a great environment growing up. There was never any pressure. Trayce playing baseball shows we were allowed to do what we wanted to do.”

1. Klay’s Father Mychal Was the No. 1 Pick for the Portland Trail Blazers in 1978 & a Two-Time NBA Champion With the Los Angeles Lakers

Klay’s dad knows what it is like to be a professional athlete. The Portland Trail Blazers selected Mychal with the No. 1 pick in the 1978 NBA Draft. Mychal averaged 13.7 points, 7.4 rebounds and 2.3 assists over his 13 seasons in the league. Mychal played seven seasons for the Blazers, and would eventually end up on the Lakers after a brief stint with the Kings.

Mychal won two NBA championships with the Lakers, and is now a broadcaster for the team. Klay’s brother, Mychel, believes his father’s game was underrated, and sees similarities with how Klay plays.

“He [Mychal Thompson] averaged 20 and 10 one year and didn’t make the All-Star Game,” Mychel explained to Bleacher Report. “I think he was a pretty big name, then he goes to the Lakers, comes off the bench and does all the little things…Anyone scoring on Klay bugs him. I think he got that from my dad, too. My dad was the same way. … And then seeing early in his career the success of doing those things has made it second nature for Klay now.”

Like Mychal, Julie was a standout athlete, playing numerous sports growing up including gymnastics, volleyball and track. Julie is from Ridgefield, Washington, a town just north of Portland, Oregon. According to the San Francisco Chronicle, Julie won the state long jump title at 18 feet, 6 1/2 inches. Where she really shined was on the volleyball court at the University of Portland.

“She was good enough to play on Team USA,” Mychal explained to the San Francisco Chronicle. “She could really play. She could dunk a tennis ball, how about that?”

Julie used to play basketball against their kids, but she never let them win. Klay admits that the moment he finally beat his mom was big for his confidence.

“I couldn’t beat her until I was 14 years old,” Klay told the San Francisco Chronicle. “That was a great moment for me. I remember it like yesterday. She wouldn’t give it to me, I had to earn it, and it took me 14 long years.”

3. Klay’s Parents Met at the University of Portland Gym

Athleticism is one thing but what really defines our family is a commitment to our core values. It’s amazing what you can achieve when your core values are aligned. @OpusBank understands this and that’s why we choose them as the #officialbank of the @thompsonfamilyfoundation. See link in bio for more information. #BusinessBanking

Julie headed to the gym to play volleyball when she was in college, and Mychal happened to be playing in a pickup basketball game. The San Francisco Chronicle detailed how Julie and Mychal met.

One day, Julie went to the university gym to play some volleyball and happened to see a pickup basketball game. One of the players was Mychal Thompson, prepping for his second season with the Portland Trail Blazers.

“I saw her out of the corner of my eye,” says Mychal. “I forgot about the game.”

The couple became familiar with the athletic life long before their children ended up following the same path. Mychal notes they did not pressure their kids to become pro athletes, but it kind of happened that way.

“Like any father of any children, you want them to find out what they are passionate about,” Mychal explained to Los Angeles Times. “I didn’t encourage one sport over another. I just told them that they have been given a gift and to respect that. I told them it doesn’t last long. Give everything you have to the sport. Basically, my boys have high-profile jobs. My wife and I are proud of them, just like millions of parents out there with kids who work hard and do their jobs well.”

4. Klay’s Brother, Trayce, Plays for the White Sox & Played on 4 Different Teams in Less than a Month in 2018

Life as a major leaguer can be a grind. Trayce experienced the ups and downs of MLB early in the 2018 season as he played on four teams in 3 1/2 weeks. According to Fox Sports, Trayce was cut by the Dodgers in Spring Training, and picked up by the Yankees. New York ended up waiving him just a few days later, and Trayce was picked up by the A’s. Klay and Trayce were excited as it looked like they were going to be roommates in the Bay Area. Klay admits his brother is a big fan of his bulldog, Rocco.

Trayce played in just three games for the A’s before he was designated for assignment. Oakland later traded Trayce to the White Sox where he plays today. Despite the adversity, Trayce, continues to believe in his ability.

“I always thought that I had the ability to play every day,” Trayce explained to ESPN. “I feel like I showed that when I was here in ’15 for I know it was brief, small sample size. I know that. But then in ’16 I thought I did the same thing in L.A. There was a point there in the middle of that season where I was hitting in the middle of the order for the Los Angeles Dodgers. I was 25 years old, and I know it was a small sample size, but I know I’m that same player. It’s up to me to go prove myself again.”

Trayce is a center fielder and has a career batting average of .217. Trayce had his best year in 2015 with the White Sox when he hit .295 in 44 games. Klay notes he has learned a lot from Trayce’s determination to make it as a pro baseball player.

“I learned a lot from Trayce because he had to go away at 18 and grind away in the minors for six years,” Klay explained to Bleacher Report. “He was 24 years old before he got his shot, and he didn’t complain one time. He’s taken 10-hour bus rides to play back-to-back games. I would find myself complaining about a practice at 11 a.m., and then I’d be, ‘Wait a minute. Think about your bro, the hard work he had to put in just to have a chance at the bigs.’ I was able to get drafted and have a much better opportunity than him, so I always think about the professionalism that he has developed the last 10 years. It’s incredible.”

According to Bleacher Report, Mychel played pro basketball for six seasons, mostly in the NBA’s G-League. Mychel recently retired from basketball to pursue other interest. Mychel averaged 10.5 points, 3.2 rebounds and 1.8 assists during his time in the G-League (at the time he played it was called the D-League). Mychel spent his final four seasons playing for the Santa Cruz Warriors, and would make frequent trips to visit his brother in Oakland.

“He’d invite the whole team up to the house in Oakland, and we’d barbecue or go out to dinner,” Klay told Bleacher Report. “At first I was like, ‘Why do I have eight dudes in my house?’ But then I was like, ‘I know what they’re going through. I completely understand it.’ And I told them: ‘You guys are welcome to come to my home and enjoy yourselves.’ Because the D-League can be a grind, just like the minors—sitting in hotel after hotel. They probably just wanted to have that home feeling. They’d come up to the house and just kick it, and I just thought, ‘Man, Myke is a good teammate to let these guys do this.’ He’s just a good soul. He cares for other people. That’s what I learned from him, and that’s what everybody says about him.” 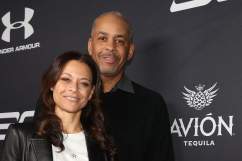 Read More
Basketball, Golden State Warriors, Klay Thompson, NBA, NBA Finals
Klay Thompson comes from a family of athletes, from his MLB brother to his dad who played in the NBA. Learn more about Klay's parents and brothers.