The Philadelphia 76ers are one of the most exciting up-and-coming teams in the leagued. Anchored by young stars Joel Embiid and Ben Simmons, the 76ers have a bright future in the Eastern Conference for years to come. Their offseason got off to a rocky start with the Bryan Colangelo “burner” saga that led to his exit as the Sixers general manager. With the front office vacancy, Sixers head coach Brett Brown is running point on both the NBA Draft and free agency at the moment.

Here is the Sixers projected lineup for the 2018-19 season with Zhaire Smith, the Texas Tech shooting guard the team acquired in a trade with the Phoenix Suns during the draft (the Sixers dealt their 10th pick, Mikal Bridges, to the Suns).

After starting with six draft picks, the Sixers consolidated their treasure chest to three.

The big question marks are Redick, Belinelli, Ilyasova, and Johnson. Re-signing them, particularly Redick, will probably come down to what the Sixers manage in free agency.

According to Real GM, the Sixers are projected to have north of $22 million in cap space, the fourth most in a league filled with teams well above the projected $101 million cap. If the Sixers do not sign any of their free agents or pick up team options on Holmes and McConnell, they will have $31,113,820 to spend in free agency, almost enough to sign a big name free agent to a max deal.

The Sixers have been linked to LeBron James for months now. If they somehow manage to reel him in, they’d have to shed a little more salary or get him to take a slight discount.

Their cap will also be affected by their draft picks. With lots of ammunition and available cap, the Sixers could be a major player in free agency. 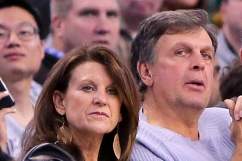