There is no official timeline on when LeBron James will make his decision, but here are the details on how long James has to choose a team. Beginning at 12:01 a.m. Eastern on Sunday, July 1st, James can officially begin meeting with teams. Even if James agrees to terms with a team early in the process, nothing can become official until 12 p.m. Eastern on Friday, July 6 when contracts can be signed. July 6 is the earliest date James can sign with a team.

Fox Sports Nick Wright reported James has already made a decision, and has informed people close to him. Wright reported an official announcement is expected to come on Tuesday, July 3. It is important to note that Wright’s report came prior to James’ representatives meeting with teams like the Sixers.

LeBron has made his decision & informed those close to him. Expect the official announcement Tuesday morning.

Although unlikely, James could commit and de-commit to a number of teams between July 1st and July 5th. The only thing that is binding is a signed contract, which cannot be done until July 6. While July 6 may be the first day James can sign, it is not a deadline for James. There is no deadline that James has to sign with a team. That said, the sooner James agrees to join a team, the sooner they can begin constructing a roster around him. Training camps do not open until late September, so he has plenty of time to decide.

How long will James take to make his decision? No one knows an exact timeline, and there was speculation early on that James could take his time in making a decision. As of late, it looks like we could know where James will go before the July 6 signing window opens. James notified the Cavaliers that he would not exercise his player option for the 2018-19 season, and instead will become a free agent. James had until 11:59 p.m. Eastern on Friday, June 29 to make this decision, but informed Cleveland on the morning of the deadline. This does not necessarily mean he will leave Cleveland, but it does eliminate some potential trade destinations like the Rockets.

While some speculated James could wait out the process to see what kind of roster the Lakers can construct. Sporting News Sean Deveney reported James could be willing to sign with the Lakers before they have transformed the team. If so, this would move up when James would announce his decision.

“That’s the sense you get with him and his people,” an anonymous GM told Sporting News. “They’re doing enough research to suggest that he’s going to be willing to take that plunge and let the roster come together. It’s what happened in Cleveland four years ago.”

How will James choose to reveal his decision this summer? During James’ first free agency, he announced he would be joining the Heat on an ESPN special with Jim Gray called “The Decision.” Back in 2014, James wrote a letter in Sports Illustrated announcing he would be going back to Cleveland. The Ringer’s Bill Simmons has speculated that James is filming a documentary during the process, but that does not necessarily mean it is the way he will reveal his latest decision.

While we don’t know the exact date James will announce his decision, marquee players typically announce their intentions before the first day players can sign with teams. If James follows this, we would know where he will sign within the next week. While this is the likely timeline, nothing prevents James from stretching out his decision if he wants to do so.

According to OddsShark, the latest odds have the Lakers as the favorites at -155, the Cavaliers second with +200 odds and the Sixers a distant third at +550. NBA insider Sam Amico reported James installed new security cameras in front of his Los Angeles home, a sign Amico believes points to a coming announcement.

“Security cameras being set up in front of LeBron’s Los Angeles home today so that the home can also be monitored by police in his current hometown of Bath, Ohio. Perhaps announcement not far off,” Amico tweeted. 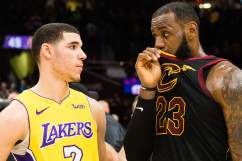 Read More
Basketball, Cleveland Cavaliers, LeBron James, Los Angeles Lakers, NBA
When will LeBron James make a decision? How long does LeBron have to choose a team? We explore all the details of LeBron's free agency.