LeBron James has committed to signing a four year deal with the Los Angeles Lakers. The Lakers still have enough cap space to sign additional free agents. Let’s take a look at what the Lakers roster and starting lineup looks like with James along with a few different scenarios.

This lineup is based on just James signing with the Lakers, and not some of the other rumors that are circulating. Keep in mind, the Lakers will also be able to add some veterans willing to sign for the minimum if James end up in Los Angeles. It is important to note the lineup is likely to look different as the off-season progresses.

The Lakers could take a conservative approach by signing James, and retaining Julius Randle, who is a restricted free agent. There are conflicting reports on whether James wants to wait to see what kind of roster the Lakers could construct before he would sign. Sporting News’ Sean Deveney reported James is willing to sign with the Lakers without a fully-constructed roster.

“That’s the sense you get with him and his people,” an anonymous GM told Sporting News. “They’re doing enough research to suggest that he’s going to be willing to take that plunge and let the roster come together. It’s what happened in Cleveland four years ago.”

DeMarcus Cousins is a name that has been linked to the Lakers over the last 24 hours. James is reported to be a fan of Cousins’ games, and could end up being the Lakers target with Paul George re-signing with the Thunder

James is not a shooting guard, but the Lakers goal is to get their top five players on the floor. Hoops Hype reported several notable veterans have said privately they would be willing to play with James for the minimum. Hoops Hype described some of the issues Los Angeles needs to address if James signs with the team.

In addition to finding a reserve point guard, the Lakers will need to bring in other big men besides Thomas Bryant and Ivica Zubac to strengthen their frontcourt.

They’d also need scoring off the bench, and there are several free agents who would jump at an opportunity to have this kind of prominent role on a team like the Lakers.

Yahoo Sports’ Shams Charania reported Lonzo Ball has a torn meniscus, but is expected to be ready for training camp. One of the first moves the Lakers would need to make would be signing a veteran big man. The USA Today listed a few possible players who might be willing to play with James for the minimum. These names included Richard Jefferson, Channing Frye, Jamal Crawford, Jeff Green and Shabazz Napier. 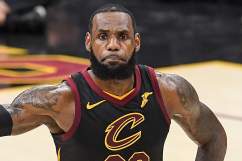