Buffalo Bills legend Jim Kelly is honored at the 2018 ESPYs with the Jimmy V. Perseverance Award for his cancer fight, according to ABC 13. The award is bestowed on someone each year, to “a deserving member of the sporting world who has overcome great obstacles through perseverance and determination.” Kelly was diagnosed with oral cancer in 2013 and was later declared cancer-free in 2014. USA Today reported that doctors discovered a squamous cell carcinoma in Kelly’s upper jawbone in 2013, which was removed. The next year, doctors found more cancer in his maxillary sinus and he underwent radiation and chemotherapy treatment to rid his body of the disease. After this, he was said to be free of cancer.

When undergoing his first surgeries, according to WXXI News, Jim said, “I am extremely confident in my road to recovery. I plan to tackle this challenge head on, as we Kellys always do, with toughness perseverance and faith.” He shared his cancer news on social media. Today, his wife, Jill, continues to update fans with her husband’s health issues, so be sure to visit her Instagram page for the latest news on Jim and photos of his progress.

Back in the Big Apple for more surgery today. Another step forward in the healing process. If all goes well, we will be back home by the weekend. Other than God’s Grace and a whole lot of praying… I don’t know how he does it. Like Hunter’s life, Jim’s struggles are a constant reminder that this life is not the end of the story. God’s plans are eternal. And He’s just getting started. We have so much to look forward to! There is immeasurably more waiting… P.S. Thank you for praying! Wish I could hug you and thank you in person.

Unfortunately, in March 2018, Kelly, again, found out that he would be battling cancer. And so, he had surgery to remove the cancer and needed to get his jaw reconstructed. According to ABC, he currently has a mouthful of stitches and cannot eat solid foods until the fall of 2018.

During his cancer battle, Kelly had also had difficulty talking, so speaking was an issue. He also lost his sense of taste and was unable to produce saliva, for a time, as reported by Fox News.

Recently, USA Today reported that Kelly has an “unexpected checkup” coming up due to effects from his most recent surgery. He explained to ESPN that, “I’m not sure what’s going on. I have some things that I want to have looked at, and then we’ll go from there. I don’t know whether I’m going to be here for two days, four days or in and out. And then hopefully I pray when September has rolled around that I can finally bite into a piece of meat and not soup every day.”

Update… Went to NYC yesterday for a checkup and moving forward, strategy meeting. The doctors were very impressed with how much Jim has healed since he’s been home. Praise God! The plan at this point is that he will have surgery in mid-June to lesson the “skin flap” bulk in his mouth, as well as put implants into his upper jaw. And then there will be more healing and waiting and then another surgery and possibly upper teeth sometime in September. All of this of course is wrapped up in the perfect plan and purposes of God…who knows all, is sovereign over all, and graciously orchestrates the details of our lives, holding everything together, and working everything together for good. None of us know what tomorrow holds…but we can choose to trust the ONE who holds tomorrow. Thank you for loving us and praying us through all of this.

According to Fox News, Kelly’s upcoming checkup will take place the second week in August. He explained, “My doctors are in New York. I’m not there every day. So I want to be sure that everything [that] is going on, is going on for the right reasons.” He also said that, “Just like everybody, if you go through a broken leg or something, you got to have checkups. If there is a little pain here [where] you think there shouldn’t be anything, you got to get it checked. Even though I’m blessed to have [the doctor] at [Erie County Medical Center] I go to in Buffalo look and make sure that things are going pretty good, it helps.”

The Jimmy V. Perseverance Award at the ESPY Awards was named after men’s basketball coach Jim Valvano, who lost his battle with cancer in 1993, as reported by USA Today. In Kelly’s acceptance speech, his aim is to speak from the heart and talk about his “four f’s” – faith, family, friends and fans.

The trach is OUT! Praise the LORD! After taking care of Hunter and now Jim throughout his cancer battle…I have been blessed and changed in multiple ways. I have also experienced and learned more than I could ever have imagined. One thing I know for sure… God is Faithful and Good and Prayer is POWERFUL! Your love and prayers have sustained, encouraged, and helped our family more than you will ever know. THANK YOU SO MUCH! We love and appreciate you! 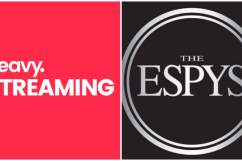 ESPYs 2018 Live Stream: How to Watch the Awards Online