The latest episode of Monday Night RAW aired on the USA Network. Here’s what happened:

10:58 – Lashley wins. Next week he will face Roman Reigns for an Extreme Rules rematch. The episode ends with Lashley celebrating.

10:55 – The momentum shifts from blow-to-blow here, and Rollins appears to get the upper hand when he takes out both Elias and lashley with suicide dives. He hits the Stomp to Elias, but Lashley manages to break up the pin. Elias attempts to make a final go at Lashley, but Lashley spears him for the pin.

10:40 – Elias is in the ring when we return from the break. He plugs his debut album, which is scheduled for released on July 23.

10:30 – There are a few cheap shots on Logan’s end to start the match, but Moon recovers and nails Logan with several brutal blows to the body. Shaken, Logan trips Moon off the top turnbuckle and covers her for the win with a little help from Liv Morgan, who distracts Moon before she can turn the tables.

10:24 – The Authors of Pain win. They keep their winning streak going.

10:22 – Another quick match. Rezar knocks Titus off the apron before tagging Akam for a double team. They use quick tags and more double team moves to dominate Crews. Titus never even got tagged in.

The Authors of Pain vs. Titus Worldwide

10:15 – Rousey grabs Bliss by the hair and drags her to the ring. She gets her in position for the armbar, but Kurt Angle comes out and talks her down. He tells Rousey that she needs to go home and wait out the last two days of her suspension. Baron Corbin tries to snitch to Stephanie McMahon, and heads backstage to make the call. Angle stops him and says that Rousey will get a match against Bliss once her suspension is up.

10:05 – Alexa Bliss comes to the ring with Mickie James after the commercial to brag about beating Nia Jax. She claims that her strongest muscle is her brain and that it wasn’t hard to outsmart Jax. Bliss dismisses Rousey because she’s still suspended, but the crowd starts reacting when Rousey walks down the stairs and towards the ring. Bliss tries to run away but Rousey cuts her off. Officials try ti drag her away before she can attack Bliss, but she breaks free.

9:53 – The B-Team win. After their victory, Bray Wyatt and Matt Hardy appear on the big screen to challenge them to a rematch.

9:50 – This fight was incredibly quick. Axel and Dallas double team Konnor for a two count. Viktor eventually gets the tag from Konnor, but it’s too little, too late. Axel and Dallas hit their finisher to pick up the victory.

The Ascension vs. B-Team

9:43 -Braun Strowman gets interviewed and says that he didn’t come out to challenge Lesnar because he already has the MITB briefcase.

9:40 – Bayley approaches Banks backstage and they talk about their friendship. Banks gets angry and says she loves Bayley before walking away. Bayley smiles.

9:35 – None of the four competitors make a strong case initially, but an attack from Alicia Fox causes Banks to seemingly come to the aid of Bayley. She takes out both women at ringside, and the referee declares the match a countout. Banks walks away after the bell without checking on Bayley.

Bayley and Sasha Banks vs. Alicia Fox and Dana Brooke

9:25 – Rawley scoops up Tyler Breeze and drives him to the corner. Rawley maintains control of the match for the most part, roughing Breeze up before hitting him with a running forearm and an Alabama Slam.

9:00 – Dolph Ziggler comes out brags about his win in last night’s Ironman match over Seth Rollins. He says he respects whats Rollins did to make the IC title what it is today, but he also says that he’s better than Rollins. Bobby Roode’s entrance music cuts him off. Roode challenges him to an impromptu match.

8:56 – Angle is talking Bayley backstage. He says that Banks is in her locker room, but Bayley says they may never be friends again. Angle doesn’t care, and he books Bayley and Banks against Dana Brooke and Alicia Fox.

8:55 – Reigns wins. He advances next week’s final match against the winner of tonight’s second three-man bout.

8:40 – McIntyre takes out Balor instantly with a hard right hand before going to work on Reigns. The Big Dog eventually recovers, however, and holds off McIntyre and Balor until he manages to hit them both with a devastating Superman Punch. McIntyre hits Finn with the Claymore, but Reigns knocks him out of the ring and Spears an exhausted Balor.

8:25 – Angle books two Triple Threat matches for tonight, with the winners facing each other for the right to face Lesnar at SummerSlam. The first will be Reigns vs. Balor vs. McIntyre and the second will be Lashley vs. Rollins vs. Elias. Baron Corbin yells at Angle for not booking him in one of the matches, but Angle says he doesn’t deserve a shot.

8:15 – McIntyre says that helping Ziggler was only phase one of his plan, and now it’s time for the second phase. Seth Rollins also comes out with a mic. Elias comes out as well, followed by Finn Balor and Roman Reigns, who all want a shot at Lesnar’s title.

8:12 – Heyman says that Angle has to pick Lesnar’s next victim, and that’s when Bobby Lashley’s music hits and he makes his way to the ring. Lashley says he had two goals when he came back to WWE: beat Roman Reigns and Brock Lesnar. He approaches Heyman, but Drew McIntyre comes out before anything can happen.

8:10 – Heyman claims that everyone has the wrong idea about Lesnar. He says that Lesnar does not care about being the universal champion and he is not solely focused on the UFC title, either. Heyman continues, saying that Lesnar wants to represent WWE when he becomes the UFC champion. Angle counters by saying that if he doesn’t defend his title at SummerSlam, he will no longer be champion.

8:07 – Before Angle can go any further, however, Paul Heyman comes out to interrupt him. Angle warns Heyman that he better save his breath is Lesnar isn’t even in the arena. Heyman teases a Lesnar appearance, but then he confirms that Lesnar isn’t there. Angle goes to strip Lesnar of his title, but Heyman cuts him off again and gets in the ring.

8:03 – The episode opens with a tribute to the late Masa Saito, who died after a lengthy battle with Parkinson’s Disease. We then cut to the ring where Kurt Angle is standing. He thanks everyone for their performances at Extreme Rules and says he is proud to be the general manager of RAW. He then brings up Brock Lesnar and his lack of dedication to being the universal champion. 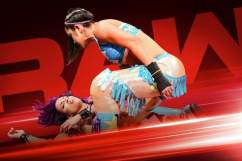