Getty Brooks Koepka pictured with his parents and girlfriend after winning the 2018 U.S. Open.

Athletics is very important for Brooks Koepka’s family. Brooks’ brother, Chase Koepka, is also a professional golfer, and plays on the European Tour. Brooks has Florida roots, growing up in West Palm Beach then attending college at Florida State. Brooks’ parents, Bob Koepka and Denise Jakows, have busy weekends keeping up with both of their sons golf tournaments during the season. Brooks learned to play golf from his father, and incorporated his mother’s determination into his game after she beat breast cancer.

“It made me figure out that life can go pretty quickly, so enjoy it,” Brooks told Golf Digest. “Make people laugh, make the best of things. Maybe not take things as seriously.”

Brooks’ parents are divorced, but he remains close with both of them. Brooks’ girlfriend, Jena Sims, is an actress and model who can be seen at a lot of Brooks’ events.

“I think it’s hilarious to be standing in the galleries watching Brooks and hearing what people say about him,” Jena told Golf Digest. “I’ll hear people saying, ‘Oh, he’s so muscular. He looks like a linebacker.’ And I’m just standing there. I’m just glad they’re saying nice things about him. But it’s a lot of fun. Brooks’ crew, his whole team, that’s basically who I hang out with. I’m meeting the girls more and more, and I think with the Presidents Cup coming up, I’ll get closer to the girls, so I’m looking forward to it. I’m slowly making friends.”

1. Brooks’ Father Is a Former Baseball Player Who Learned About Golf While Working at Champion Lakes Golf Resort

According to Golf Digest, Brooks’ dad played baseball, and was the pitcher at West Virginia Wesleyan. He would later pick up golf, and started working for his uncle at the Champion Lakes Golf Resort in Bolivar, Pennsylvania. Bob did whatever was needed, which meant he did a little bit of everything. In addition to working at the course, he began to study the game. ESPN detailed how Bob became a student of golf, and eventually would teach his sons how to play.

Groat’s nephew, Bob Koepka, did a little bit of everything at Groat’s course. Bob gassed up the carts, vacuumed the pro shop, replenished the water stations and even tended bar at night. Bob Koepka also studied the golfers and their swings. He’d taken up the game after college, and if he saw a local make a decent shot out of the rough at the eighth hole, he’d ask the man afterward how he executed it.

And then Bob Koepka would go out to No. 8 and drop down a bunch of balls and practice that same shot. Bob never had a formal lesson, but soon enough he made himself a scratch player who later introduced the game to his sons, Brooks and Chase. The boys became so good so quickly they started advising their father on how to fix all the mechanical flaws in his homemade swing.

After Brooks won his first of two straight U.S. Open titles on Father’s Day in 2017, Bob was overcome with joy. He spoke with ESPN about what the moment meant.

“I just hope every father out there gets to experience something like this,” Bob told ESPN. “I don’t even know what to say. This is the best feeling in the world.”

The uncle that Bob worked for at the golf course was the legendary baseball player Dick Groat. Golf Digest described Groat’s accomplishments.

Groat won two World Series as a shortstop with the Pittsburgh Pirates, earned the 1960 National League MVP award and earned a spot on eight National League All-Star teams. A multi-sport athlete, Groat was also drafted third overall in the 1952 NBA Draft by the Fort Wayne Pistons. Grout, who is now 86 years old, is a radio analyst for Pitt basketball.

Brooks is also passionate about baseball, and admitted to Golf Digest he would switch sports if he had the opportunity.

“If I could do it over again, I’d play baseball—100 percent, no doubt,” Brooks told Golf Digest.

According to Newsday, Brooks’ mother was diagnosed with an aggressive form of cancer seven years ago. While at Florida State, Brooks took time off when he could to help care for his mother. Denise made is through chemotherapy, and can now be seen at some of Brooks’ golf tournaments. She told Newsday her son’s laid-back attitude has a way of helping the family.

“He is very low-key,” Denise explained to Newsday. “But there are random things that happen throughout the year that are a ton of fun. He’ll say, ‘Oh, we’re going on vacation.’ And then we’ll be on vacation. We don’t necessarily follow calendar holidays, but there are Brooks’ holidays nonetheless and they are fun.”

Brooks and Chase Koepka are ready to team up for the @Zurich_Classic. pic.twitter.com/ca1hJ5SISQ

Weekends are busy for Brooks’ parents. Not only do they have to keep up with how Brooks is playing, but his brother, Chase, is on the European Tour. Bob’s time working at the golf course looks to have paid off with two sons who are professional golfers. The two were paired together at the 2017 Zurich Classic in New Orleans, and Brooks spoke with Golf.com about the pairing.

“I just think that the way this format is set up, we know each other’s games so well that it will actually suit us,” Chase noted to Golf.com. “I know his strengths and weaknesses, he knows mine. I think that’s actually a good asset for this format.”

The brothers ended up finishing fifth at the event. Since turning pro in 2016, Chase has earned $76,669 in prize money in Europe. Chase has also played in two PGA Tour events, and made $140,225 in winnings.

Brooks’ girlfriend, Jena, has become like family to him, and can often be seen cheering him on during tournaments. The couple met at the 2015 Masters.

“We met at the 2015 Masters,” Jena explained to Golf Digest. “And that’s so special because I’m from Georgia, so it’s perfect. We were on Hole 7, which I don’t even remember, but he’s like, ‘Oh, I remember what you were wearing, where we were standing, everything.’ It was cool. We hadn’t dated since then. We were just friends at that point.”

When asked what it is like going to the different Tour events, Jena told Golf Digest she loves it, as she grew up watching golf with her father.

It’s so fun. I’m pretty lucky that my actual job isn’t a 9 to 5, so it really gives me flexibility to go out and watch Brooks. This week, I had an audition in the city, so I was able to go watch Brooks [at Glen Oaks in Long Island] and then I went. But it’s nice. I love being able to support Brooks and watch him because he’s so talented. It’s so much fun to watch him.

He’ll say to me all the time: ‘It must be so boring walking around in the crowd watching me play.’ And I’m like, no way. I actually really enjoy it. I grew up around golf; my dad is a huge golfer. So I really enjoy watching him and being around there. Everyone’s so nice. 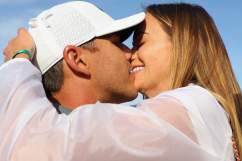 Read More
Golf, PGA
Family is key for Brooks Koepka. Brooks' brother plays on the European Tour, and his parents are regulars at events.