At the PGA Championship at Bellerive in stl and LOOK who I finally met…. wait..umm..I got this…hold on..@jenamsims ! Could not be sweeter or a better sport. Best of luck this week to the Koepka TEAM! pic.twitter.com/522o833FQI

Golf fans may remember Fox announcer Joe Buck calling Brooks Koepka’s girlfriend, Jena Sims, by the name of his ex-girlfriend, Becky Edwards, during the 2017 U.S. Open. Sims and Buck finally met at the 2018 PGA Championship, and it looks like both parties had a good sense of humor about it. Buck tweeted out a photo of Sims after they met.

“At the PGA Championship at Bellerive in stl and LOOK who I finally met…. wait..umm..I got this…hold on..@jenamsims ! Could not be sweeter or a better sport. Best of luck this week to the Koepka TEAM!” Buck noted in the tweet.

It is difficult to get confused now as Sims has become a regular at Koepka’s tournaments. Koepka met Buck at a Houston Astros game back in 2017.

Sims has always been a good sport about the mistake as she explained to Golf Digest shortly after the incident happened.

“My phone LIT up,” Sims told Golf Digest. “It was half like, ‘Congratulations to Brooks!’ And the other half were, ‘Did you hear what happened?’ And I was like, of course I did. It was immediate. I was like, It’s OK, life continues. We’re just fine. It was an honest mistake.”

Brooks Koepka’s Girlfriend, Jena, Is an Actress, Model and Philanthropist

According to IMDB, Sims has had a busy 2018 with a number of movie projects. Sims is an actress and model who is also passionate about her charitable efforts. This year, Sims has worked on The Price for Silence, Tales of Frankenstein, Thursday the 12th and Angel Investors. She is also rumored to be appearing in The Hotel Maiden.

Sims has made appearances in a long list of movies including Kill the Messenger, Last Vegas and Attack of the 50 Foot Cheerleader. Sims started a non-profit called Pageants for Hope, where the organization reaches out to children in difficult situations. Here is how Sims described the organization to Talk Nerdy With Us.

Besides acting, I have been running a very successful non-profit organization for the past ten years. The actual name of the organization is HBBQ inc. Which stands for Has Been Beauty Queens. Thanks to my pageant experience, I have this really large network of former pageant winners. We are not scared to call ourselves the has-beens, because we are. [Laughs].

We put on this event, which is called Pageant of Hope. It’s a special pageant for kids facing challenges. It initially started as a pageant for kids with cancer, because at an early age I lost a lot of family member to cancer. I was really passionate about raising money and raising awareness in hope there would be a cure for cancer one day.

The first Pageant of Hope was for kids with cancer. It’s been ten years, so now I’ve branched out. The pageants are all kids facing any challenge.

As for Koepka, he has had a solid 2018 on the PGA Tour. Kopeka won the U.S. Open again, and, yes, Buck got Sims name right on the broadcast this time around. Kopeka is also in contention for yet another major at the PGA Championship. 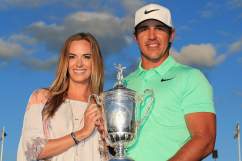 Does Brooks Koepka Have a Wife? Is the Golfer Married?