Tiger Woods’ net worth is estimated at $740 million, according to Forbes. Since going pro in 1996, Woods has earned more than $1.4 billion. His earnings have come from winning tournaments and various endorsement deals.

As the 2018 Tour Championship winds down, he currently sits 16th in earnings for 2018, with $3.8 million so far. If he maintains his place atop the leaderboard, he’ll add a $1.62 million piece chunk of the event’s $9 million total purse home with him.

Tiger Woods has been adding to his overall net worth in recent months, with six Top 10 finishes on the year.

While he isn’t the highest paid athlete of all time (he’s currently the 12th. Roger Federer is No. 1), Woods is the highest earning golfer.

Here’s what you need to know about Tiger Woods’ net worth, career earnings, and endorsements:

During the 2018 season, Woods has, thus far, earned $3.82 million, according to ESPN. Those winnings come in the form of six Top 10 finishes, among them two majors; Woods has yet to win an event in 2018.

Woods earned $327,000 for his sixth-place finish at The Open Championship, at Carnoustie Golf Links, in Scotland. The only time Woods has broken $1 million this year was his second-place finish at the PGA Championship at Bellerive Country Club. His share of that purse was $1.18 million, accounting for 30 percent of his winnings on the year.

If Woods is able to win the 2018 Tour Championship, he’ll increase his earnings on the year by 40 percent, to more than$5.4 million.

2.  He Earned an Estimated $37.1 Million Last Year & Was Ranked the 8th Richest Celebrity in America on Forbes’ 2017 List

Last year, Forbes released its annual list of wealthiest celebrities in America. Woods found himself holding down the eighth spot, wedged between Jay Z in the No. 7 spot ($810 million) and Dr. Dre in the No. 9 spot ($740 million). For reference, the wealthiest celebrity in America in 2017 was George Lucas, with an estimated net worth of $5.5 billion.

3.  He Owns a $54.5 million Home in Jupiter Island, Florida & a Restaurant Nearby

Woods purchased a 12-acre lot in Jupiter Island, Florida, in 2006, while he was married to his now-ex-wife, Elin Nordegren. He knocked down the existing 9,000 square foot home and rebuilt a mansion that was more to his liking. According to Forbes, the property also boasts a 4-hole golf course, a putting green, a lap pool, a dive pool, and a tennis court. The property is worth an estimated $54.5 million.

You can see pictures of Woods’ estate in the video below.

In addition to owning his Florida-area home, Woods also owns his own restaurant nearby. The Woods is located at Jupiter’s Harbourside Place, an area filled with shopping and dining options. The menu is filled with various options from lamb and chicken to ahi tuna and shrimp scampi. There are also extensive wine and cigar lists.

“The Woods Jupiter is Tiger’s flagship restaurant. After years of meals on the road, he decided to bring his vision of an elevated sports bar to life at home in Jupiter. Envisioned as a place where friends and family could come together to relax and refuel, The Woods has become a destination to celebrate like a champion,” reads the eatery’s website, in part.

“Just as every course is unique, TGR Design employs an individualistic approach tailored to best benefit each project. TGR Design aims to set the highest standards for golf course design from the unparalleled service we provide our clients to the final result—delivering a memorable golf course.”

TGR Designs has designed Blue Jack National in Texas, El Cardonal at Diamante in Mexico, and Jack’s Bay in the Bahamas, to name a few.

4.  His Biggest Endorsement Deal Is With Nike; He Signed a $200 Million Deal With the Company in 2013

Not long after he turned pro in 1996, Nike offered him an endorsement deal that he couldn’t refuse. And while he’s had some bumps along the road (including several extramarital affairs and a DUI arrest), Nike has stuck by Woods.

In 2013, Nike re-upped Woods’ contract once more, offering him a reported $200 million.

“We’re comfortable with where we ended up and the career trajectory that Tiger will be on with Nike. I’m thrilled we were able to complete this deal,” Woods’ agent, Mark Steinberg, told ESPN.

“We are thrilled to continue our partnership with Tiger. He is one of Nike’s most iconic athletes and has played an integral part in Nike Golf’s growth since the very beginning. We look forward to sharing many more of the exciting awe-inspiring sport moments that Tiger is known to create in golf. At the same time, we will continue to utilize his insights to develop the most innovative products that support golfers reaching their full potential,” Nike Golf president Cindy Davis told ESPN in a statement.

Over the years, Woods has earned money from deals with Gatorade, Gillette, Rolex, Fuse, NetJets, and EA Sports, to name a few.

Additionally, Woods is a content partner of the PGA Tour. According to Thought.co, this means that TigerWoods.com and PGATour.com “have an agreement to share content between their respective websites.”

5. He Paid His Ex-Wife $100 Million in Their Divorce Settlement

Woods and his now-ex, Elin Nordegren, went through a pretty nasty divorce. The two married in 2004 and split in 2009, after Nordegren found out that Woods had been cheating on her with multiple women. According to TMZ, Nordegren received $100 million in the divorce settlement.

“Sources say Elin will receive child support, but we do not know the specific amount. As for the $100 million figure … this is not speculation … it comes from sources with direct knowledge of the property settlement agreement,” TMZ reported at the time.

Woods and Nordegren welcomed their first child, daughter Sam Alexis Woods, on June 18, 2007. Their son, Charlie Axel, was born two years later on February 8, 2009. It is believed that Woods still pays child support, and that he will continue to do so until his kids are 18. 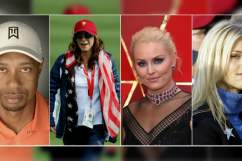