Elin Nordegren, Tiger Woods’ ex-wife was one of the many victims of Tiger Woods’ infidelity. Over a dozen women later, Nordegren called it quits with her cheating, international superstar of a husband and the world finally realized that Tiger really is human.

Since the fateful night that Nordegren kicked him out of their home via physical force, Tiger went from the face of professional golf to the butt-end of every golf joke. The former number one player in the world’s game has never recovered from the emotional trauma caused by his personal life.

Here’s what you need to know about Tiger’s one and only ex-wife:

1. She Met Tiger When She Was a Nanny For Swedish Golfer Jasper Parnevik

Nordegren, 35, was born in Stockholm, Sweden on January 1, 1980 to parents Thomas Nordegren and Barbo Holmberg. Her mother, Barbo had a successful public service career and her father, Thomas, is still considered to be one of the most famous Swedish journalists. The Nordegrens got divorced when Elin was just six years old.

Elin met Tiger Woods while she was nannying for Swedish pro golfer, Jasper Parnevik. While working in a clothing store in Sweden, she met Parnevik’s wife, Mia and they hired Nordegren to look after their children. The job required her to move full-time to the United States in 2001. She was introduced to Woods by Parnevik during the British Open that year and they became an item in 2002.

When Parnevik heard about Woods’ infidelity in 2009, he was outspoken about his disapproval and disgust for the number one player in the world, but reconciled with Woods over a round of golf.

“Tiger is a member of the same club as me in Florida, at the Medalist. I never hold a grudge. It was over pretty quick, but that was my initial reaction because Elin was like a daughter for me. Tiger and I played nine holes out at Medalist, so there’s nothing there. Everybody makes mistakes. He’s been dealing with enough stuff in his life. You say what you think and move on.

2. She and Her Twin Sister Were Models

Elin has two siblings, her sister Josfin and their older brother, Axel. Elin is just moments older than her twin sister, Josfin. Both girls are known for their beauty and eventually became models after Elin became became recognized for her famous new boyfriend, Tiger Woods.

Nordegren was also active and played soccer for many years and loved going to school. Although Elin appeared on the cover of a Swedish magazine in 2000, she didn’t have huge dreams about modeling and over the years worked towards a college degree.

3. She Graduated From Rollins in 2014 and Delivered the Commencement Speech

Nordegren balanced two children and going back to school in order to earn her bachelor’s degree in psychology. After nine years, she ended up graduating from Rollins College in Florida with a 3.96 GPA and her coveted psychology degree along with the honors of making the commencement speech at the graduation ceremony in May 2014.

During her speech, she joked about her marriage/divorce with Woods while delivering her inspiring address and wowed the audience. She humored the crowd by saying:

“When I entered my student advisor office in the fall of 2005 I was 25 years old and had just recently moved to America. I was married without children. Today, nine years later, I’m a proud American and I have two beautiful children…..but I’m no longer married.

Watch the video above to see her entire commencement speech.

Editors note: Interested in making $1 million playing fantasy golf? Of course you are. And thanks to Heavy’s partners at DraftKings, you can. With the $2.5 Millionaire Maker fantasy contest, you can turn your $20 into $1 million with golf’s second major of the season. Pick 6 golfers with your $50,000 salary cap; the better your players do on the course, the better your fantasy team does. The contest begins Thursday, June 18, at 6 a.m. Eastern when the pros tee off, so lineups must be set by then. Over 29,000 entered teams will get paid. Sign up with DraftKings today for your chance to win some major money playing fantasy golf. 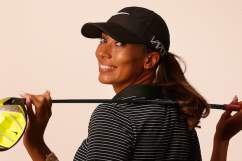 4. She Had Two Children With Tiger

Nordegren and Woods tied the knot in 2004 at the Sandy Lane Resort in Barbados after two years together. Woods apparently rented out the entire resort for a whopping $2 million for the week.

Three years later on June 18, 2007, the couple announced the birth of their first daughter, Sam Alexis Woods. Sam was born a day after Woods finished runner-up in the 2007 U.S. Open. In September of 2008, Woods announced his wife was pregnant again and that they were expecting their second child in 2009. Their son, Charlie Axel, was born on February 8, 2009.

The two children were spotted at the 2015 Masters in Augusta caddying alongside Woods’ ex girlfriend, Lindsey Vonn.

5. She Won $110 Million in the Divorce Settlement

After Woods cheated on Nordegren with dozens of women in one of the biggest scandals in the history of sports, Woods had to pay up.

Woods’ net worth was about $600 million at the time from his titles and endorsements from companies such as NIKE. This made the rumors of her receiving $750 million absurd, however Nordegren was said to have settled with about $110 million .

Woods was making anywhere from $10-$15 million a year from NIKE plus other endorsements like EA Sports and Rolex that made it add up to $55 million in one year , according to Business Insider. He had also made $104 million from tournaments and actual play.

Woods ended up selling the home Nordegren kicked him out of that night for $2.2 million to Bubba Watson. However, he kept the private jet and 155 foot yacht.

Nordegren started dating billionaire Chris Cline in March 2013, but they split a year later in 2014. Cline is estimated to be worth about $1.2 billion.