Instagram Lauren Shehadi is the sideline reporter for the Sox-Yankees series.

Lauren Shehadi has quickly risen in the ranks as a studio host. The 35-year-old is a fixture on MLB Network as both a host and a reporter, appearing on a number of shows on the station.

Since college, she has been in front of the camera, talking sports. Shehadi has also been involved behind-the-scenes.

Shehadi is sideline reporter for the Red Sox-Yankees playoff series.

Here’s what you need to know about Shehadi.

1. Shehadi Is a Studio Host & Reporter For MLB Network

Mets and Yankees coming up next @mlbnetwork

During the regular season, Shehadi co-hosts The Rundown with Matt Yalloff. The show keeps fans updated on all that’s happening around the league that day. It features highlights and live game look-ins, among other exclusive content.

Shehadi is a regular contributor to Hot Stove, the station’s morning show dedicated to baseball, during the offseason.

2. She Has Also Worked at CBS Sports

You know you’re old when your cohost for the day says BRB to get to commercial. @scottbraun @mlbnetwork

Before joining MLBN, Shehadi worked as an anchor and reporter for CBSSports.com and CBS Sports Network.

She also had her hand in baseball at CBS, serving as a contributor to the 2011 College World Series Home Run Derby.

Shehadi is originally from the D.C. Metropolitan area. In conversation with The Washington Post, Shehadi said,  “All my greatest baseball memories are from the nation’s capital or around the Beltway… I remember [American] Legion softball games, being on travel teams where you have five games in a day. All of my favorite memories that molded me into a baseball fan happened in and around D.C., so being able to cover the game of all the greats there is really special for me.”

3. Shehadi Was a Candidate For Playboy’s Sexiest Sportscaster

He kept asking me for workout tips ?

In 2009, Shehadi was a candidate for Playboy’s Sexiest Sportscaster contest. Joining her in the competition were Erin Andrews, Bonnie Bernstein, Charissa Thompson, and Molly Sullivan.

The winner that year? Erin Andrews.

4. She Was an Intern For ‘The Best Damn Sports Show Period’

Shehadi scored an internship on The Best Damn Sports Show Period, a Fox talk-show focusing on sports. It was hosted by Chris Rose and featured former athletes and comedians like John Kruk, Tom Arnold, Deacon Jones and John Salley.

Early in her career, Shehadi was as a sports anchor at KXMC-TV in Minot, North Dakota, and also a producer at SNN-Channel 6 in Sarasota, Florida.

5. Shehadi Graduated From The University of Florida

When did you fall in love with baseball?

Shehadi graduated from the University of Florida, where she got her start in the sports media world. There she hosted an internet web show called Gatorzone.

Shehadi said that she fell in love with baseball when she was 12 years old. She said (as seen in the video above), “I fell in love with this great game at age 12. I remember it so vividly. The Angels were in town to face the Orioles and growing up in the D.C Metropolitan area, Cal Ripken Jr. was larger than life, and he was breaking Lou Gehrigs’ consecutive games played streak. and the standing ovation was twenty minutes… it was a who’s-who in the crowd. Presidents of the past, baseball royalty…I remember thinking, ‘This guy has played 17 years, never missed a day of work. That is something to idolize for me.'” 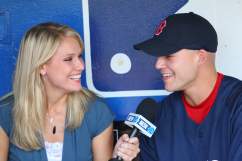