Linda Holliday is the girlfriend of future Hall of Fame coach Bill Belichick. The two have been dating for more than 10 years.

Holliday, 55, can usually be seen with Belichick rubbing elbows with Boston’s elite at evening functions. She is also a regular at Gillette Stadium where she roots for the New England Patriots with her two daughters and several other Pats WAGs, including Rob Gronkowski’s girlfriend, Camille Kostek.

On Sunday, January 13, Holliday will undoubtedly be on-hand when the Pats take on the Los Angeles Chargers in the AFC Divisional Playoff Game. Fans can keep an eye on her Instagram account as she usually posts photos and videos from games to her Instagram story.

Holliday met Belichick in 2007. The two were at a Florida nightclub at the time and had an instant connection. According to Player Wives, Holliday was at the club for a Girls Night Out. She was actually dating another man at the time but broke things off with him to pursue things with Belichick. They started dating shortly after and Holliday soon became a staple at Patriots games, both at home and on the road.

The two were spotted several times together in Arizona in the week leading up to Super Bowl XLII in February 2008. In 2017, Holliday was in Houston to celebrate the Patriots come-from-behind win in Super Bowl LI, beating the Atlanta Falcons 34-28. Last year, Holliday is with Belichick in Minnesota, watching the Patriots take on the Philadelphia Eagles.

Belichick and Holliday haven’t taken their relationship to the next level, officially, but there have been engagement rumors flying around for years. In early 2014, for example, rumors that the couple was engaged started circulating after Holliday was spotted wearing a diamond on her left ring finger. Those rumors turned out to be false.

Although the two live together and spend most of their time together, they don’t seem to be in any kind of rush to take the plunge.

2. She Has 2 Daughters From a Previous Relationship

A solid good BYE to the regular season

Holliday has two daughters, Ashley and Kat Hess, from a previous relationship. The girls — who are twins – both graduated from Trinity College in May 2015. They currently run a fashion blog called The Hess Twins and have been spotted at many Patriots games over the years.

Holliday has been married three times before, but details about her previous relationships aren’t clear.

Belichick was previously married to Debby Clarke Belichick and has three grown kids of his own; his daughter Amanda is the head lacrosse coach at Holy Cross, his son Steve is a safeties coach for the Patriots, and his son Brian works as a scouting assistant for the organization.

3. She Spends a lot of  Time in Nantucket

Holliday spends a lot of time in Nantucket, Massachusetts, where she has a home with Belichick. The island off the coast of Massachusetts has been a favorite getaway destination for Belichick and Holliday for many years.

“No matter what everybody is doing during their busy lives, Nantucket is where family comes together as a unit again,” Holliday added.

4. She Is an Entrepreneur, Has Worked as a TV Host & Is the CEO of the Bill Belichick Foundation

A Jupiter, Florida, native, Holliday once owned Blue Indigo Boutique, a clothing store, but was forced to close the business in 2009.

She was able to land on her feet and scored a job as a Lifestyle Correspondent for Style Boston, which aired on CBS Boston.

Holliday is also active with the Bill Belichick Foundation, which “aims to provide coaching, mentorship, and financial support to individuals, communities, and organizations.” She is currently the CEO of the organization.

She also attends many benefits, including one with Belichick in 2014 in support of breast cancer research.

5. She Was Twice a Runner-Up in the Mrs. Arkansas Pageant & Is a Huge Patriots Fan

Holliday graduated from Vanderbilt in 1986 with a bachelor’s degree in Radiography. She was also a runner-up finisher in the Mrs. Arkansas pageant — twice.

Holliday is a huge supporter of her longtime boyfriend and she’s also a huge New England Patriots fan. Not only does she attend just about every home game, but Holliday is also on-hand for road games, playoff games, and other Patriots-related events throughout the year.

Holliday is always wearing some fun, custom-made Patriots swag and gets really into it on game days — and beyond. Check out the following photo that she posted just before Christmas.

In the words of @kimbykosanovich ~ it’s an AFC East Championship kind of Christmas! Proud of our Patriots! ?????? #Squad #TheLastCall

Holliday has also become great friends with other Patriots WAGs and enjoys spending time with them both at football games and during the offseason. 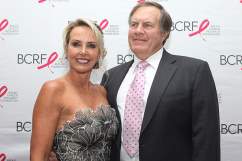