Bill Belichick and Linda Holliday did a spread in Nantucket Magazine, opening up about their relationship in one of the most candid interviews that the New England Patriots head coach has ever done.

The magazine refers to Belichick, 65, and Holliday, 53, as the “winning combination” — and somehow got Belichick to actually smile. While the coach may be gearing up for training camp, he is making sure to spend some quality downtime with his girlfriend.

Belichick and Holliday enjoy spending time on the Massachusetts island of Nantucket. The quaint beach-filled island has been a favorite summer destination for Belichick and Holliday for many years. It’s a place that they always come back to, no matter what’s going on — it’s a place that they’ve enjoyed together, romantically, and with their families.

“No matter what everybody is doing during their busy lives, Nantucket is where family comes together as a unit again,” Holliday added.

2. Engagement Rumors Have Been Flying for Years

Belichick and Holliday have been together for so long and have made so many appearances together that many people just assume that they are married. However, Belichick hasn’t popped the question (as far as the public knows) and the only rings in his home are ones that he has acquired from winning Super Bowls.

According to Nantucket Magazine, Holliday actually has two custom-engraved Super Bowl rings. However, she hasn’t been spotted rocking a diamond ring of the engagement kind — at least not recently. There has been at least one occasion where Holliday has been seeing wearing some kind of bauble on her left ring finger, but the moment someone asks or engagement talk kicks up, she moves the right to her other hand and is sure not to stir the rumors any further.

Holliday’s social media pages have the word “girlfriend” in their respective bios. On Twitter, her bio reads as follows:

Following their spread in Nantucket Magazine, TMZ reported that a ring could be in the couple’s near future. While that might be another Super Bowl ring, many feel as though Belichick might pop the question sometime soon. The popular gossip site compared the spread to a “wedding shoot,” which just screams, “Will you marry me?”

Belichick had been divorced from his ex-wife, Debby, for about a year when he met Holliday in 2007. The two were at the same nightclub in Florida when they locked eyes. According to Player Wives, Holliday was with some of her lady friends for a “Girls Night Out,” in Palm Beach. The two got to talking and got to know each other a little bit.

The site reports that Holliday was actually dating another man at the time and that she broke things off with him to pursue things with Belichick. Rumor has it, Belichick sent flowers to Holliday the day after they met — and the guy that Holliday had been seeing actually signed for them.

The note on the flowers was short and sweet. It read, “Thanks for the wonderful evening, Bill.”

4. Belichick & Holliday Have 5 Children Between Them, But No Children Together

Belichick has three children with his ex-wife, Debby. All three of his kids are grown and all are heavily involved in sports, just like their dad.

His daughter, Amanda, played lacrosse at Wesleyan University. After four years as a player, Amanda became a coach. She held coaching positions at the University of Massachusetts, Ohio State, and her alma mater, Wesleyan, before being offered a position as Holy Cross’ head coach, where she works today.

Belichick’s youngest son, Brian, became a part of the Patriots staff in 2016. He currently works for the team as a scouting assistant.

Meanwhile. Holliday is mom to twin daughters, Ashley and Katie Hess. The girls graduated from Trinity College in May 2015. They currently run a fashion blog (that is undergoing some sort of facelift) and have been spotted at many Patriots games over the years. 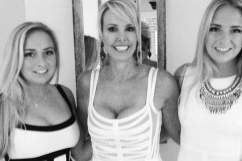 5. Holliday Is a Huge Supporter of Her Boyfriend — And the Patriots

As you could probably imagine, being a Patriots fan is pretty much a requirement if you’re going to date the team’s head coach. Fortunately, Holliday has that box checked off her list. Not only does she go to tons of games to cheer on her boyfriend and the Super Bowl champions, but she also has been known to really get into the spirit that is Patriots football.

At the beginning of the 2016 season, Holliday posted the following photo on Instagram. Her custom-made hat read, “Do Your Job,” a phrase that became a Patriots slogan the year before. The additional letters “BB” are obviously Bill Belichick’s initials.

It's never too early to start planning your game day attire! ? Love this hat by @blueskysandsunshineshop and tassel necklace by @indiahicksstyle ?????You can purchase the necklace through @wchippy #NoHassleTassel ?

Holliday also had a custom jacket made for the Super Bowl. The blinged out hoodie was covered in Swarovski crystals. Check it out below.