Tony Romo and Jim Nantz are the Super Bowl 53 announcers for CBS as the Patriots take on the Rams at Mercedes-Benz Stadium in Atlanta. Tracy Wolfson and Evan Wasburn are on the sidelines providing the viewers with updates from each team.

Since retiring as the Dallas Cowboys quarterback, Romo has had a wildly successful start to broadcasting. Romo seems to have a crystal ball as he consistently calls out plays on the field before they happen. Romo notes that the secret to being a good broadcaster is getting the viewer to care about what is happening during the game.

“As far as the broadcasting aspect of it, I think at the core it is nothing more than my ability to get you the viewer to care about this play, this game, and why is this important,” Romo explained to The Athletic. “Why is this really special with this coach schematically? Why did this quarterback protect this play? It’s like, can I get you to care about my story of my buddy who was drinking the other night? Do you care about the story I am about to tell? You are trying to get people to care about things.”

Former NFL referee Gene Steratore will also be on the broadcast to discuss officiating. Jay Feely will be discussing the kicking game from field-level as well.

CBS Is Using 8K Cameras During the 2019 Super Bowl Broadcast

CBS has 115 cameras capturing all of the action in Atlanta. For the first time on any network sports broadcast, CBS will be using 8K cameras and virtual reality graphics, per a CBS Sports press release.

For the first time ever on any network at a live sporting event, CBS’ Super Bowl LIII virtual plan includes the use of a live, wireless handheld camera showing augmented reality graphics and up-close camera tracking on the field. This will allow the camera to get closer to these virtual graphics in a way that gives viewers different perspectives and angles including never –before-seen field level views of these graphics…

For the first time ever on any network in the United States, CBS will use multiple 8K cameras with a unique, highly-constructed engineering solution to provide viewers with even more dramatic close-up views of the action from the endzone including possible game changing plays along the goal lines and end lines.

Romo will broadcast his first Super Bowl in just his second season calling NFL games. Romo discussed how he expects to feel in the booth when the Patriots square off with the Rams.

“I think the biggest thing is you have to own it,” Romo explained to The Athletic. “When you have a big moment, you have to know coming in that you want to dominate this thing. You want to walk in there like you are Robert Redford in The Natural. The AFC title game last year was great because that was our big game and the feeling was, ‘Let’s go, this is going to be fun.’ Last year I was like, ‘I know these teams and we are going to be all right.’ So that is the feeling I am going to go into the Super Bowl with.” 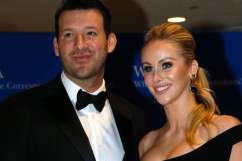