Rory McIlroy is married to wife Erica Stoll, but the former PGA Tour employee prefers to stay out of the public eye. It was Stoll that was one of the PGA employees that prevented McIlroy from missing his 2012 Ryder Cup tee time.

The couple got married in 2017 at an Irish castle in front of a number of notable celebrities including members of U2 and Ed Sheeran. The golfer noted that one of the things he enjoys most about being with Stoll is that he can be himself.

“I could speak to her about anything, we ended up spending a bit of time together and realized that there was something more there,” McIlroy told the Independent. “I love that she knows everything about me, and there was no judgment there. There was no judgment from day one, which is huge, because that’s very hard to find for someone in my position.”

Stoll is absent from social media and does not do interviews. This does not mean she does not play a crucial role in McIlroy’s career. The golfer admitted it was Stoll that helped him get over his 2018 Masters loss to Patrick Reed. McIlroy detailed to the New York Post how Stoll stopped him from drinking wine and binge-watching shows as he attempted to get over Augusta.

When I got back home I sort of threw the clubs in a closet and I spent about a week decompressing and trying to get over it. I was binge-watching a couple of shows, I read a couple of books, drank a few bottles of wine — no, not like that, not all at once! That sounds really bad. It wasn’t that bad.

But it got to the point where Erica had to drag me out of the house. She just said we’re going to go out and do something. And once I got back into my routine, I was fine. Before, there were a few quiet moments when you catch yourself thinking back on the round, even though I was trying to immerse myself in anything but golf.

GettyRory McIlroy pictured with ex-girlfriend Caroline Wozniacki during the 2014 Par 3 Contest prior to the Masters.

McIlroy initially thought the best dating philosophy was to be with someone who was used to living in the public eye. The golfer quickly realized that he did not enjoy it.

“Yeah, how do you [get sucked into life in a celebrity bubble]?” McIlroy pondered to The Independent. “I thought at the time that being with someone that was in a similar position to you was the obvious answer. But it isn’t, because you can never get away from it. You can never detach yourself and try to come back to the real world. And that’s why I feel in such a good place now. I don’t feel Erica wants to change me in any way. I can be myself around her; there’s no bull—-, no acting, no show.”

When the two first started dating in 2015, McIlroy noted that having things settled in his personal life helped him on the golf course. McIlroy is one of the top golfers in the world and is consistently competing for tournament titles.

“I am very happy in my love life,” McIlroy said in 2015, per The Washington Post. “We haven’t really been putting it out there. She is from America, which is why I like to spend time in Palm Beach…The past six or seven months have been really nice. That part of my life is going great…If everything off the golf course is good, it allows you to be better on it as well.” 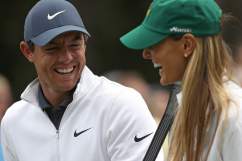