Getty Kyler Murray is the favorite to be the No. 1 pick in the 2019 NFL draft.

The 2019 NFL draft starts on Thursday, April 25th at 8 p.m. Eastern in Nashville, Tennessee. Draft fans will have three TV viewing options as all three days will be broadcast on ABC, ESPN and NFL Network. Fans wishing to check out the red carpet coverage can begin watching Thursday on NFL Network at 6 p.m. Eastern.

What can fans expect from the NFL draft TV coverage? ABC will be covering all three days of the draft and will be a different broadcast than ESPN despite both being owned by Disney. ABC is expected to focus more on special interest stories, while ESPN covers the X’s and O’s behind each pick.

“The ABC side will focus on the players’ journey and telling stories of the players behind the scenes,” ESPN vice president of event and studio production Seth Markman told The Athletic. “ABC will not get into how this player fits into a 3-4 scheme as much as you will see on the ESPN side. On the ABC side, it will be more about what the player was like in college, what his journey was, who he is, and what kind of player he will be. For instance, when a player is drafted on ABC, they may go to a player feature as opposed to an X&O feature.”

Fans Can Watch the NFL Draft on ABC, ESPN or NFL Network

NFL Network’s broadcast will look a bit different as Mike Mayock moves from the set to be in the war room as Raiders GM. Daniel Jeremiah will move into Mayock’s role as NFL Network’s main analyst.

“Mike was a trusted voice for the fan and for teams across the league,” NFL Network’s vice president of production Charlie Yook explained to The Athletic. “There was a comfort level for our viewers. I don’t think any of us will say losing Mike is not a big deal, but like in life you have contingency plans and prepare. Not much has changed in our planning for this show, but it is more of an opportunity for Daniel to shine and to become a bigger voice for this event.”

Here is a full rundown of the NFL draft schedule for all seven rounds. 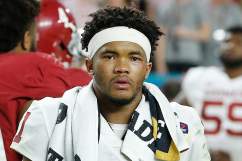 Read More
Football, NFL, NFL Draft
When is the NFL draft? When will the draft start? We break down the NFL draft schedule for all seven rounds with the dates, times and TV channels.