According to the Las Vegas Review-Journal, this is the second-highest payout in the Derby’s history. Country House faced the second-longest odds in the field and his No. 20 post position was far from an ideal spot.

According to the Kentucky Derby, $25.96 million was wagered at Churchill Downs. Country House’s trainer Bill Mott believes the review reached the correct conclusion.

“There were two horses in the race that lost all chance to win a Kentucky Derby,” Mott said, per the Las Vegas Sun. “They were in position at the time to hit the board. If what happened to us was the only thing they were looking at I don’t think you would have seen a disqualification….I don’t think Luis Saez did anything intentionally. My heart actually aches for them a little bit. That’s the way it is. I’ve been on the other end of it, just not in the Kentucky Derby.”

Here is a more detailed look at the betting payouts for the Kentucky Derby.

The following data is courtesy of NBC and is based on a $2 bet. The numbers to the left of the horse are its post position.

A horse player at MGM Resorts sportsbooks did far better, making and winning two identical superfecta wagers, on the top four finishers. Each bet was for just $4. The whopping return: approximately $51,000 on each wager, or $39,065.10 per ticket after taxes were drawn – a total of $78,130.20.

“He must’ve been a saint in a previous life,” Mirage sportsbook supervisor Scott Shelton said. “He literally turned $8 into $80,000. This is a miracle.”

Contrary to what some may have expected, the disqualification ended up costing Vegas sportsbooks money because of the crazy payouts. Westgate SuperBook director John Murray noted they would have made money if Maximum Security had won. 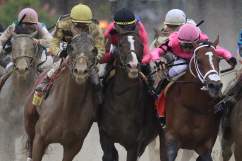