The New York Knicks have not even won the NBA draft lottery but there is already speculation about what could happen to the pick that will turn into Zion Williamson. During the latest episode of The Bill Simmons Podcast, Simmons suggested the Knicks would consider trading the No. 1 pick in a package for the Pelicans’ Anthony Davis.

“I think if they win it, they flip it for Anthony Davis, almost immediately, if they know Durant and Kyrie are coming and they can figure out how to fit all three,” Simmons noted.

The quote is part of a bigger conversation Simmons was having with Ryen Russillo about the impact the No. 1 pick could potentially have on the Knicks free agency push. Russillo asked whether the Knicks winning the lottery could have a negative impact on their chances of landing Kevin Durant and Kyrie Irving. Given Williamson’s star status coming out of Duke, Russsillo wondered if some NBA free agents may not want to play with him for fear of being in his shadow.

While Simmons threw out the possibility of the Knicks trading the pick, let’s look at the feasibility of New York forgoing their chance to select Williamson.

Could the Knicks Trade the No. 1 Pick for AD to Pair With KD & Kyrie?

There may be some legs to the trade idea. The New York Post reported that the Pelicans have interest in the Knicks draft pick along with Kevin Knox.

“New Orleans would want a package,’’ an NBA source told The Post.

How much will the Knicks be willing to give up for Davis in addition to Williamson?

According to a source, the Pelicans have interest in both of the Knicks’ 2018 draft picks, Kevin Knox, their lottery pick, and second-rounder Mitchell Robinson, who happens to reside 15 minutes outside of New Orleans, in Chalmette, La.

The Pelicans were one of the teams who came away impressed by Knox’s potential after his summer league, though he suffered through a roller-coaster rookie year.

Even if it is something the Pelicans would consider, there is a lot of risk with the potential trade. Davis will be on the final year of his contract and the Knicks would risk losing a potential franchise player for someone who could walk after a year.

The benefit of a high draft pick is having a promising young player who is on a team-friendly contract. Fielding a team around Davis, Durant and Irving means the rest of the roster would mostly be filled with veterans on minimum contracts.

It seems the Knicks would only pull the trigger on this kind of deal if they knew Irving and Durant did not want to play with a rookie like Williamson. We saw a similar scenario when the Cavs traded No. 1 pick Andrew Wiggins for Kevin Love after LeBron James returned to Cleveland.

Stephen A. Smith Reported That There Is a “95 Percent Chance” Durant and Irving Sign With the Knicks

It is important to note that the NBA draft happens before free agency. A trade for Davis before the draft means there is nothing binding about Irving or Durant coming to New York, even if there is verbal evidence of their intention.

The Knicks could follow the path the Cavs laid out which is to draft the player then trade them away after free agency but before the start of the season. ESPN’s Stephen A. Smith reported that there is a “95 percent chance” that the Knicks land Irving and Durant.

“Yes. From everything I’ve heard, KD and Kyrie are planning on coming to New York. 95% Chance they say! Only potential hiccup is KD changing his mind,” Smith said, per Hoops Hype. 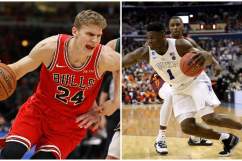