Getty Kawhi Leonard and Kevin Durant discussed teaming up on the Clippers.

Could the New York Knicks sign both Kevin Durant and Kawhi Leonard in NBA free agency? A recent report suggests that the two All-Stars could team up in New York City. Fox Sports’ Cris Carter reported that Leonard is interested in teaming up with Durant as a member of the Knicks.

“Interesting insight from Chris Carter this morning on @FTFonFS1. Carter, who is very close w/ Kawhi Leonard and his camp, said that:
‘I believe the Knicks have a shot to land Kawhi and KD.’ And added that Kawhi and Durant teaming up in New York is a ‘real possibility,'” NBC Sports Tommy Breer tweeted.

For those wondering why a Hall-of-Fame wide receiver would have info about Leonard, Carter reportedly has a close relationship with the Raptors All-Star. Breer emphasized Carter’s strong track record when it comes to information regarding Leonard.

“For those questioning the validity of Chris Carter’s opinion on Kawhi Leonard’s situation – go back and check Carter reporting regarding Kawhi and the Spurs relationship last year. He has had more accurate inside information about Kawhi than arguably any sports media personality,” Breer tweeted.

It would be an interesting move for the Knicks to use their entire cap space on two forwards. However, Durant and Leonard looked like the two best players in the NBA during the postseason.

If the Knicks do have a realistic chance at landing both superstars, the front office would have to jump at the chance to do so and figure out the logistics later.

Knicks Are the Favorite to Land Kevin Durant

The Knicks have long been the favorite to land Durant in free agency. Leonard has mostly been linked with the two Los Angeles franchises or staying with the Raptors on a short-term deal.

We had expected to see the two superstars compete against each other in the NBA finals, but a calf injury sidelined Durant for the first four games of the title series. Fox Sports’ Chris Broussard reported that the Nets are the favorite to sign Kyrie Irving and the point guard will attempt to recruit KD to Brooklyn.

“The latest on the NBA streets is Kyrie Irving is leaning heavily towards Brooklyn and is trying to get Kevin Durant to join him,” Broussard noted on The Colin Cowherd Show.

Knicks “Expect” to Get a Meeting With Kwahi Leonard

The Knicks have been generating recent buzz over the last week when it comes to their potential pursuit of Leonard. The New York Post reported that New York “expects” to meet with Leonard when free agency begins.

According to NBA sources, Knicks president Steve Mills and general manager Scott Perry expect to get a meeting with Raptors star Kawhi Leonard and at least have a puncher’s chance despite all the Kevin Durant hoopla.

Carter’s report appears to be from Leonard’s perspective, but the New York Post also reported that Durant does not have a close friendship with the Raptors star.

With reports Kyrie Irving is eyeing the Lakers and Nets — who opened up a second max salary spot with Thursday’s trade of Allen Crabbe — more strongly than the Knicks, a domino effect could take place in which KD may not want to come alone. Durant does not know Leonard well and they play the same position. 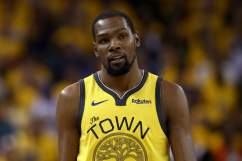