Pascal Siakam is originally from Douala, Cameroon where he grew up with a supportive family. Cameroon is a country in Central Africa which borders a number of places including Nigeria and Chad. Pascal and his family had to deal with tragedy in 2014 after his dad, Tchamo Siakam, died in a car accident. The death of Pascal’s father motivates him every game.

“People always tell me ‘I know he’s proud of you,’” Pascal said during the 2019 NBA finals, per The Canadian Press. “I kind of want to hear it from his mouth, it would be really cool. I have a bigger purpose. I play for something bigger than basketball.”

Pascal’s path to the NBA has been a wild ride, and the Raptors forward is likely one of the only players to have attended seminary prior to joining the league. It was all part of Pascal’s journey to play for a “bigger purpose” as Pascal noted as the Raptors competed for a title.

Pascal’s father died in a 2014 car accident while he was in college at New Mexico State. Pascal’s sister, Raissa, called him to tell him his father was involved in a two-car accident and died. Tchamo was taken to the hospital but died four days later of internal injuries, per ESPN. Now, Pascal plays for a purpose bigger than himself.

“I ask myself what my father would think of me making it to the NBA every day,” Pascal told Bleacher Report. “I hope he’s proud. I hope he’s watching down and realizing that his dream became a reality. But that’s a question I ask myself every day.”

GettyPascal Siakam’s shoes with the message “RIP Dad” written on the side.

The Raptors forward is consistently motivated to play in honor of his late father. Pascal frequently writes “R.I.P. Dad” on his shoes, a reminder of who he is playing for. After Pascal had a career performance in Game 1 of the NBA finals, he noted that he is playing for his father on the league’s biggest stage.

“I’m just doing it for my dad,” Pascal said, per Sports Illustrated. “Going out there every single night, not worrying about whatever is going on. Just have a bigger purpose.”

3. Pascal Missed His Father’s Funeral Thanks to His Mom’s Urging to Continue Playing College Basketball

Despite Pascal wanting badly to go back to Cameroon for his father’s funeral, he ended up staying in the States. Pascal was urged by his mother and family not to attend the funeral.

According to CNN, Pascal’s mom believed his father would want him to continue playing college basketball as he kept his eye on his dream of playing in the NBA. ESPN reported there was also skepticism that Pascal would be allowed back in the country if he left for Cameroon.

…Pascal had applied for a new visa that was still being processed. If he flew to Cameroon, there was a strong chance he would not be able to return to the U.S. without the proper paperwork. “My brothers are saying, ‘You can’t come.’ My mother says it, too,” Pascal says.

Pascal is not the only athlete in his family as his three brothers all played college basketball. The Raptors forward detailed his journey to the United States in an article he wrote for The Players’ Tribune. Pascal’s brother James laughed when he told him a coach advised him to play basketball.

I remember calling James after the camp.

“A coach wants me to come to America to play basketball.”

“Come on, man, stop playing,” he said. “You don’t even like basketball!”

5. Starting in Middle School, Pascal Was Sent by His Father to a Seminary to Study to Become a Priest

Pascal has one of the most unique journeys to the NBA. Pascal’s father sent him to a seminary just like his three older brothers. Pascal was a 11 years old and just finished elementary school in Douala, Cameroon. Pascal detailed his fears about attending seminary in an article for The Players’ Tribune.

My brothers had all told me terrible stories about the seminary. The food was awful. The classes were hard. You had to wake up at 5:30 every morning. You were all alone, far away from your family and home. Even though the seminary I was going to was different from the one my brothers went to, I still didn’t want to go!

ESPN’s Jackie MacMullan reported that Pascal was doing his best to get kicked out of the seminary. Contrary to Pascal’s wishes, his father sent him right back to the seminary.

By the time he was 15, Siakam, by his own admission, grew to loathe the seminary. He did not want to be a priest, so he began to misbehave, hoping Father Collins would dismiss him. The priest devised curfew punishments for his rebellion, prompting Siakam to lash out further. It was a cycle that became arduous and tedious for both. “Our relationship,” Siakam says, “was a clash.”

He was briefly sent home to Douala on a bumpy, eight-hour bus ride, an outcome that secretly pleased him. But Tchamo insisted he return to fulfill his obligations.

Despite trying his best to convince his dad otherwise, Pascal ended up at the seminary where he graduated in 2012. He finally made his way to the United States to continue his dream of playing basketball much to the delight of Raptors fans. 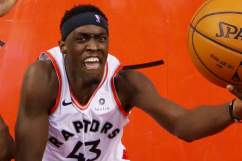